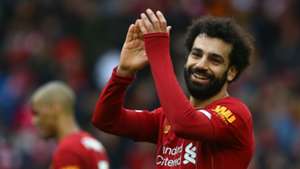 Mohamed Salah could be considered Liverpool's best signing of the last 10 years, says Danny Murphy, although he fears an exit could be on the cards as "everybody leaves in the end".

A star turn in Jurgen Klopp's current squad has posted another record which sees him top two prolific Reds strikers of the past.

Salah has reached 100 Premier League appearances for Liverpool, finding the net on 70 occasions during that spell.

That return from a century of outings is better than Torres and Suarez managed in their respective spells on Merseyside, while an African star has also become the first man since Michael Owen to reach the 20-goal mark in three successive seasons.

Impressive consistency has been displayed by the 27-year-old, who is a two-time Golden Boot winner, with his efforts made all the more remarkable by the fact that he operates in a wide attacking role, rather than a central one.

With all of that taken into account, Murphy believes Salah represents Liverpool's finest piece of transfer business in the modern era. The former Reds midfielder told talkSPORT: "Mo Salah is a unique player.

"To score this many goals so quickly from that wide position is sensational.

"To compare him to strikers is difficult because he doesn't play centrally, but to achieve what he has so quickly from a wide role is a better achievement than what any of the strikers at Liverpool have achieved.

"He's probably been as good a buy for Liverpool as anyone over the last ten years.

"I know Luis Suarez was sensational, but Salah's consistency and his durability as well, he very rarely misses games.

"And he's so unassuming, he goes about his business so under the radar. He's not flash, he doesn't do any silly provocative celebrations, he just keeps banging in goals.

"The love for Mo Salah is there - I just think it's subsided a bit due to [Sadio] Mane's brilliance this season, and [Roberto] Firmino, too.

"But ultimately when, or if, Mo Salah leaves Liverpool he's going to be remembered not just because he's a wonderful goalscorer but because he's been part of this team that has won the Premier League after 30 years and has won the Champions League.

"That's why he'll be remembered. All the goals only matter if something comes at the end of it."

Salah has sparked transfer talk on a regular basis since becoming a talismanic presence at Anfield, with Real Madrid and Barcelona said to be keen on acquiring his obvious ability.

Murphy admits a move could happen at some stage, adding: "Everybody leaves in the end."

For now, Liverpool are looking for a key man to deliver more inspiration in the present as they prepare to take in the second leg of a Champions League last-16 tie with Atletico Madrid that they trail 1-0 on aggregate.