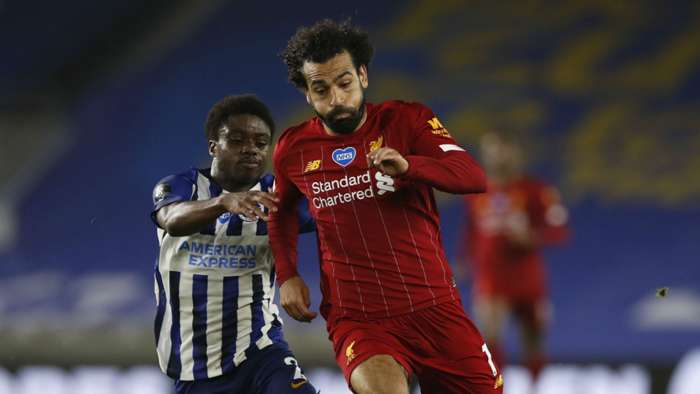 Mohamed Salah joined a trio ofLiverpool legends in a prestigious club as he played a starring role in a3-1 win over Brighton and Hove Albion.

The Egypt international scored twice as the Premier League champions recorded their first away triumph since February 15, moving on to 92 points with four games remaining.

Salah steered the visitors in front in the sixth minute and then assisted Jordan Henderson's goal that arrived just 127 seconds later, laying the ball off for the Liverpool captain to curl a shot beyond Mat Ryan.

Leandro Trossard halved the deficit before the break, but Salah made sure of victorywhen he headed in Andy Robertson's corner, taking his tally in the league this season to 19 goals.

He has also now reached 100 goal involvements for Liverpool in the Premier League, tallying 73 goals and 27 assists to achievethe feat in only 104 appearances.

In 2019-20 alone Salah has recorded nine assists in the top flight alongside his goals, behind only Trent Alexander-Arnold and Manchester City star Kevin De Bruyne in the overall standings.

"I don't know why but I think I have a good assists number since I came here," Salah told Sky Sportsafter the final whistle on Wednesday. "In my position, I think I'm doing well."

Only three players have reached the milestone previously for the Reds. Michael Owen and Robbie Fowler achieved the century in 148 and 158 games respectively, while Steven Gerrard's landmark came up in his 212th outing.

Jurgen Klopp's side also created history at Brighton by winning for the 30th time in their 34th Premier League fixture this season. No other side has reached that tally as quickly in the history of the English Football League.

Next in the Reds' sights will be two records currently held by Pep Guardiola's City, and both set during their imperious 2017-18 campaign.

While with 75 goals scored Liverpool are unlikely to challenge City's best-ever mark of 106 that same season, a strong end to the term could see them become the Premier League's best-ever in terms of points and wins.

Three wins out from their last four outings would see Liverpool rise to 101 points and 33 wins for the season, beating their rivals'100 and 32 achieved two years ago.

Burnley are the champions' next opponents, visiting Anfield on Saturday.