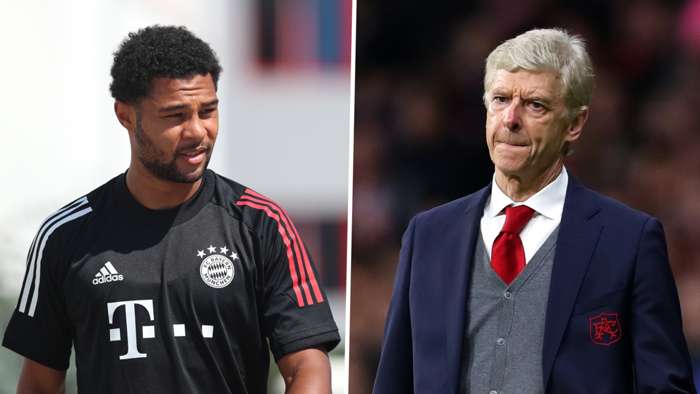 Arsene Wenger has revealed he was "very sad" when Serge Gnabry decided to leave Arsenal in 2016.

After a failed loan move to West Brom in 2015, Gnabry joined Werder Bremen permanently in 2016 before linking up with Bayern Munich one year later.

The now 25-year-old has gone on to starfor the Bundesliga giants and scored a crucial double as Bayern defeated Lyonin the Champions League semi-finals on Wednesday, with Wenger quick to point out the performance of his former protege.

"Let's not forget Gnabry, I bought him at the age of 15 from Stuttgart and he was injured a lot," Wenger told beIN Sports.

"His tendency was a bit too easy, like I've told you about with these young talented players, but he has matured a lot and is now one of the dominant players in Germany."

While Gnabry had yet to show his full potential in 2016 and wasstrugglingwith injuries, Wenger revealed he was desperate for the German attacker to remain at the Emirates.

"No, no, we had an agreement with him you know," Wenger said.

"I had given him out on loan to West Brom andhe didn't play a game.He came back, he was injured.We workedvery hard with him for six months and he went out with the German national team, under-21's, and Bayern made a deal with Werder Bremen.

"He wanted to sign in the end, didn't want to extend his contract (with Arsenal) and I was very sad. But we couldn't get over the line with him because I knew he would have a great career.

Though Wenger was impressed by the performance of Gnabry against Lyon, the former Arsenal boss noted Bayern's defence must tighten up before facing Paris Saint-Germain in the Champions Leaguefinal on Sunday.