Rudiger opens up on Tottenham racism allegations: I felt like a monkey 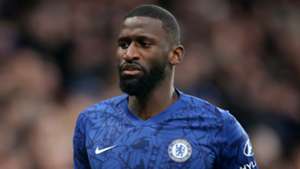 Antonio Rudiger has revealed that he felt like "a monkey" and insisted he will not "shut my mouth" despite the closing of an investigation into alleged racism suffered by the Germany international at Tottenham.

The 27-year-old Chelsea centre-back claims that he was subjected to racist chants during his side's Premier League win at Tottenham Hotspur Stadium on December 22.

After initially notifying his captain, Cesar Azpilicueta, about the alleged chants, referee Anthony Taylor then called for an announcement to be made over the stadium's public address system to warn fans against making abusive chants.

Both Spurs and the Metropolitan Police conducted an investigation after the match, although it was announced in January that there was "no evidence to support the allegation of racial abuse".

A Tottenham statement read: "The club and the Metropolitan Police have now exhausted all avenues of investigation following the reported incident at our home fixture against Chelsea on 22 December.

"We carried out extensive reviews of CCTV images and footage, working with professional lip readers. All materials and reports have now also been reviewed by the police who have carried out their own investigation.

"The police have notified us today that, having reviewed and investigated, they have closed the crime report as they can find no evidence to support the allegation of racial abuse.

"We fully support Antonio Rudiger with the action that he took - however there is no evidence to corroborate or contradict the allegation and as such neither ourselves nor the police are in a position to take any further action.

"We are fiercely proud of our anti-racism work and our zero tolerance of any form of discrimination. This is one reason why we have attributed so much time and resource to investigating this matter.

"Had we identified anyone guilty of this we were intent on issuing them with a lifetime ban from our stadium as they would have no place among our proud, diverse fan base. If any new information comes to light, this will be fully investigated."

And the former Roma defender has now expressed his dismay that he is being portrayed as a liar, insisting that he felt like "an animal".

He told Der Spiegel: "I ask myself: 'How is it possible that nobody of the 60,000 people in this stadium realised anything about it?' So, I stand there [accused] as a liar. I have the feeling that I'm expected to shut my mouth. But I have a message: I won't do that.

"I felt as if I wasn't a human being, but an animal. A monkey. I think if you haven't lived such situations you can't imagine how I felt. Against Tottenham I felt incredibly lonely."

Rudiger also revealed that Tottenham striker Harry Kane apologised to him after the game and that he was grateful for the gesture from the England captain.

"I said [to Kane]: 'It's absolutely not your fault, you don't have to apologise.' But he wanted to do it as a sign that his club doesn't think like that. That was good for me [to hear]."

Commenting on the frequent cases of racism that are blighting society in general, Rudiger added: "The news shocks me. I just cannot understand that racism still exists today."