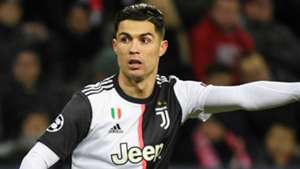 Cristiano Ronaldo was a spectator at Sunday's Clasico between his old club Real Madrid and Barcelona after seeing Juventus' own grudge match called off due to health concerns.

On Saturday, Serie A confirmed that the Derby d'Italia would not go ahead due to the coronavirus outbreak in Italy.

A total of five top-flight matches were cancelled, mostly in the north of the country where the disease has spread widest, with over 30 deaths now reported.

Left with a free weekend, then, Ronaldo took the opportunity to fly to the Spanish capital for a reunion with his former team-mates.

The Portugal international was spotted in one of the Bernabeu's executive boxes taking in the Clasico action as Madrid looked to climb above their arch-rivals and reclaim first spot in La Liga.

And he was left celebrating when Vinicius Junior, one of the young striking talents tipped to succeed Cristiano, scored after 71 minutes to give the hosts the lead.

Ronaldo's last taste of the Clasico had come towards the end of 2017-18, which proved to be his final season as a Merengue player.

In typical fashion, Ronaldo found the net away from home at Camp Nou, adding to Nacho's goal to give Madrid an early 2-1 lead against the Catalans, who had struck first through Luis Suarez in a thrilling start to the match.

Madrid were unable to hold onto their advantage, with Lionel Messi swooping to equalise after Barca had gone down to 10 men.

The Blaugrana continued on to take the domestic title that season with Madrid finishing a disappointing third, although they did celebrate their third straight Champions League title a matter of weeks later with a resounding 3-1 defeat of Liverpool.

In total, Ronaldo played 30 Clasicos for his former club between 2009 and 2018, winning eight, drawing eight and losing on 14 occasions.

He also managed 18 goals against Barca, lagging behind all-time Clasico top scorer Lionel Messi who has struck 26 times in the fixture.