Ronaldo's perfect partner? Pirlo hoping Dzeko is the answer to Juventus' No.9 problem

Ronaldo's perfect partner? Pirlo hoping Dzeko is the answer to Juventus' No.9 problem 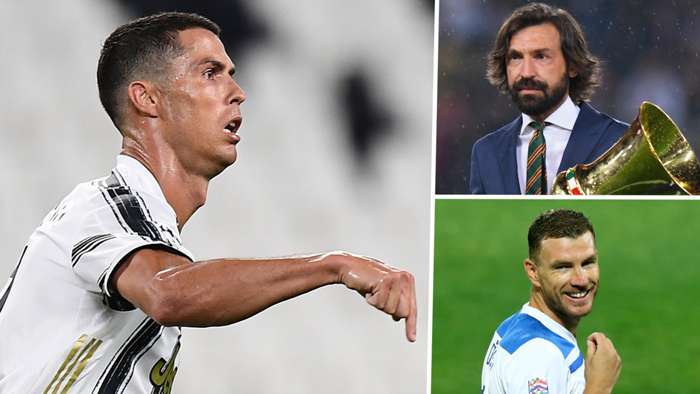 Juventus may have appointed Andrea Pirlo as their new boss on August 8 but only this week did he secure the qualifications he needed to carry out every aspect of his job.

That may be significant or it may mean nothing at all. It's certainly impressive that Pirlo secured the highest grade in his class.

But he was bettered by Thiago Motta, who arrived at Genoa last August with a lot of new ideas – including his much-touted butmisleading 2-7-2 formation – and was sacked four months later with the Ligurians bottom of Serie A.

Pirlo has plenty of interesting ideas himself, which is hardly surprising for a man who called his autobiography 'I think, therefore, I play'.

Renzo Ulivieri, the president of the coaching school Pirlo attended, and the man who evaluated his thesis, certainly paints a positive picture of the rookie.

"He was a great student, always attentive," the former Bologna and Napoli boss told the Gazzetta dello Sport on Tuesday. "He knows the right moment to enter into a discussion.

"He studied and updated his notes continuously; he never stops.

"His ideas are not only modern but avant-garde. Today football is evolving faster than light, so you need to be always looking forward and Pirlo's objective is to propose a very international brand of football.

"The thing I found most interesting about his thesis was related to the defence, which he conceptualises in a very aggressive manner: moving out to mark players yet remaining in a line.

"These are concepts that are not easy to apply but nonetheless very interesting."

It was certainly fascinating watching Juve's backline at work in last weekend's friendly win over Novara.

During the first half, Juventus operated with a back three when in possession, but Alex Sandro dropped deeper to form a more conventional back four whenever they lost the ball.

Further upfield, meanwhile, Aaron Ramsey was ostensibly playing on the left-hand side of a midfield four but the versatile Welshman was given the freedom to move infield to support the front two of Cristiano Ronaldo and Dejan Kulusevski.

The front two looked sharp and combined well together, with Kulusevski teeing up Ronaldo for the first goal. They are a viable option in attack, given new signing Kulusevski is one of those tremendously useful players who can fulfil a number of offensive roles.

His pace and ability to beat a man should prove invaluable assets to Pirlo this season. However, neither he nor Ronaldo could be considered natural strikers and Pirlo knows this. He made it clear after the game that he wants a No.9 and now, belatedly, it seems he's about to get one.

Luis Suarez came to Italy this week to take a language exam, in order to secure the citizenship status he requires to avoid taking up a non-EU member of Juve's squad.

However, that effort could now prove in vain, with Juve set to sign Edin Dzeko from Roma if Napoli striker Arkadiusz Milik finally agrees to move to the Stadio Olimpico. We know that Pirlo is a keen admirer of the Bosnian, and understandably so.

Dzeko hardly tallies with Juve's attempts to rejuvenate their squad. He's 34, two years older than the man he's effectively replacing, Gonzalo Higuain. However, times are tough for everyone in football; no club without a state or an oligarch behind them is spending big money this summer.

Juve, like nearly everyone else, have been hit hard by the coronavirus. Their annual losses will be significant, for the second season in a row. So, picking up a low-cost but still world-class forward would represent a decent bit of business for Juve.

And Dzeko certainly has more left in the tank than Luis Suarez. The Uruguayan can lay claim to being the finest centre-forward of the past decade but it's clear that his best days are well and truly behind him.

The ingenuity and terrific technique that characterised his career at Anfield and Camp Nou are still there; they were evident in his goal against Bayern Munich in the Champions League quarter-finals.

However, in that same game, Suarez's loss of the pace that made him such a nightmare for defenders was made painfully clear when he was lost a race with David Alaba for a through-ball in which he had the benefit of a significant head start.

Dzeko, of course, is by no means fast. But then, he has never relied on speed to score goals, or create them, more pertinently.

Of the two ageing superstars, it is Dzeko – rather than Suarez – who is better equipped to coax another great season out of Ronaldo.

Suarez may still link well with Messi but Dzeko, because of his size, touch and awareness, who would gel better with Juve's Portuguese talisman. He could effectively perform the selfless support role that Karim Benzema played so perfectly during Ronaldo's time at Real Madrid.

As it stands, Juve will probably struggle to retain their Serie A title, given Inter's impressive and rapid rate of progress under Antonio Conte. After clear-the-air talks following the Europa League final, the Nerazzurri are united and have a clear idea of where they want to go, and how to get there.

By contrast, there is just so much uncertainty surrounding Pirlo and Juventus. Indeed, we don't even know yet where Serie A MVP Paolo Dybala fits into his plans – if at all.

There are also doubts over whether Pirlo will prove a better motivator than his predecessor, Maurizio Sarri, who essentially paid the price for failing to secure the full support of the dressing room.

Pirlo is starting from a more advantageous position, of course. He is already on good terms with a number of the team's most influential players, with whom he won four Scudetti, and while he can come across as somewhat dour on television, he is renownedas an engaging character with a mischievous sense of humour behind the scenes.

Rui Costa recently told Goal that all of his former AC Milan team-mates knew that Pirlo would become a great coach, while ex-Juventus defender Paolo Montero says he possesses the same charisma as Zinedine Zidane in that "he doesn't even need to speak."

Pirlo will need to form a strong bond with Ronaldo, obviously, and former Italy international Alessandro Diamanti is optimistic on that front too, telling the Corriere dello Sport last month, "Andrea has more personality than Cristiano. He is a person that can open the world with just three words. It would be fun to listen to an exchange of ideas between a former No.1 and today's No.1.

"Pirlo has the talent to do anything in life. If you gave him a Formula 1 car, he'd be making life difficult for Lewis Hamilton inside three months."

He'll certainly need to be a fast learner. He may be an immensely and universally popular figure – earlier this week, he was even named Serie A's sexiest coach by an Italian dating app – but he has been hired to win in Europe. Given his contract is quite small, Juve will not hesitate to sack him if things are not going well.

Pirlo has admitted himself that silverware is must; nothing less than a 10th consecutive Scudetto for the club will suffice.

Demetrio Albertini told the Gazzetta on Wednesday, “Pirlo is used to facing challenges, and he usually overcomes them.”

And he’s done well so far. He passed his coaching exam with flying colours. But the true test of his coaching credentials is about to begin.