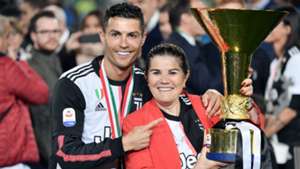 Cristiano Ronaldo has flown home to Madeira after his mother was rushed to hospital after suffering a suspected stroke in the early hours of Tuesday morning.

Dolores Aveiro, 65, was admitted to Dr Nelio Mendonca Hospital, where she is due to undergo tests to determine her physical wellbeing over the next few hours.

Ronaldo's mother has already had a blood clot removed from an artery, and is reportedly now in a conscious and stable condition while being kept under observation.

The Juve forward is travelling to the Portuguese island on a private jet, having been granted a day off on compassionate leave by the Italian club.

Ronaldo was pictured at Santiago Bernabeu on Sunday to watch his old club Real Madrid beat Barcelona in the latest edition of El Clasico, with Juve forced to take the weekend off due to the coronavirus outbreak.

The Bianconeri were scheduled to take on Inter at the Allianz Stadium, but the fixture was one of five to be postponed in the Italian top flight.

Ronaldo returned to Turin to prepare with the rest of the squad for Wednesday's Coppa Italia semi-final second-leg tie against AC Milan, but his participation is now in doubt.

There has been no official comment from Ronaldo or Dolores' other three children as of yet, but the family have requested for her privacy to be respected while she rests in intensive care.

Sporting CP, the club where Ronaldo began his career and Dolores still works as an ambassador, have released a statement to wish her a "speedy recovery" and there has been an outpouring of sympathy across social media.

Dolores has suffered from health scares in the past, having been diagnosed with cancer on two occasions, with Ronaldo donating ?100,000 to build a new cancer centre at the hospital where she was treated back in 2009.

She publicly revealed her struggles with the illness before Ronaldo's 34th birthday last year, telling reporters: "I was operated on another breast in Madrid, I've had radiotherapy and now I'm fighting for my life."

After their latest Coppa Italia outing, Juventus are due back in Serie A action on Sunday, with a trip to Bologna on the cards.