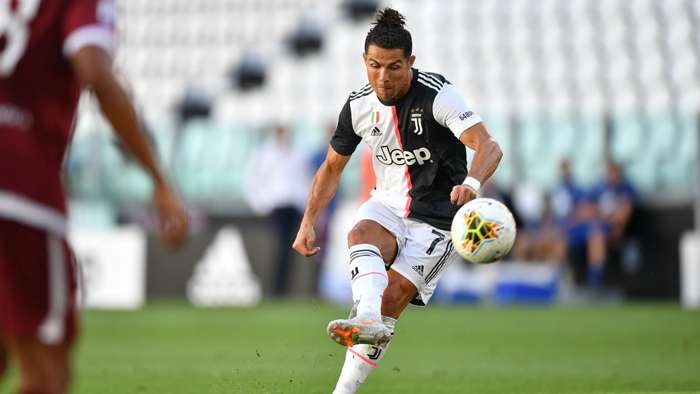 Cristiano Ronaldo has become the first man in 60 years to hit 25 goals for Juventus in a single Serie A season, bringing up the milestone with his first-ever free-kick goal for the Italian giants.

The prolific Portuguese reached that mark by finding the target in Saturday's derby against Torino, which ended in a convincing victory for the league leaders.

His remarkable standards have been maintained throughout the current campaign, with the target found on 25 occasions through just 26 appearances in the Italian top-flight.

Ronaldo is still looking to chase down the Capocannoniere crown in 2020, but remains four efforts short of Lazio frontman Ciro Immobile.

Time is still on the 35-year-old’s side, though, and he remains a model of consistency.

He has helped Juve back to the top of the table this season, as they chase down a ninth successive Serie A crown.

Title glory was enjoyed during his debut campaign in Italy, but only 21 league goals were recorded by a five-time Ballon d’Or winner.

That haul has been raised this term, allowing him to match the efforts of club legend Omar Sivori from 1960-61.

The Argentine-born Italy star scored exactly 25 to help Juve win the Scudetto that season, although he was pipped to the top scorer title by Sampdoria's Sergio Brighenti.

Nobody has managed 25 league goals since then, with legendary figures such as Alessandro Del Piero, Roberto Baggio and Michel Platini all falling short.

Ronaldo’s exploits in front of goal are now expected and no longer come as any surprise.

Over the course of a record-setting career, he has raised the bar of individual excellence to never before seen heights.

He is the complete package when it comes to a modern-day footballer, with there seemingly nothing that he cannot do.

Questions have, however, been asked of his free-kick record at times.

For someone who stands over so many set-pieces, Ronaldo’s strike rate is not the best.

That has remained the case during his time in Turin, although a dead ball situation was the source of his most recent strike.

Ronaldo’s effort against local rivals was his first from a direct free-kick for the Bianconeri, with 42 previous attempts having failed to find the back of the net.