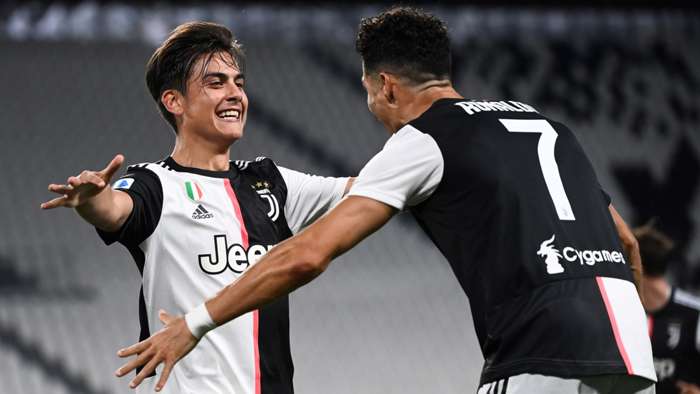 Cristiano Ronaldo and Paulo Dybala can still work on improving their "incredible" partnership, according to Juventus boss Maurizio Sarri.

Ronaldo linked up with Dybala for Juve's second goal in Monday's 2-1 win over Lazio, having earlier opened the scoring from the penalty spot to become the first player to net 50 times in the Premier League, La Liga and Serie A.

But while Sarri has been encouraged by their partnership up top, he believes there is even more to come from the pair.

"It's evident we can play a lot better and have ample margin for improvement," Sarri said at a pre-match news conference on Wednesday when asked about Ronaldo and Dybala.

"I don't see this difficulty in having top level players like Ronaldo and Paulo Dybala sharing the field, as they have already scored 51 goals between them in two seasons."

As well as breaking another record with his double against Lazio, Ronaldo drew level with Ciro Immobile at the top of the Serie A scoring charts with 30 goals.

But despting the title being within touching distance and the Champions League set to resume next month, Sarri sees no reason to give the Portugal international a breather.

"I spoke to him 10 minutes ago and he said he's in great shape," Sarri said.

"This is part of his strength -the ability to quickly recover both physical and emotional energy, setting his sights immediately on the next target. It allows him to push beyond fatigue.

"In Germany they have the problem of the season ending a month before the Champions League. We are still playing for the title and cannot think about anything else for now."

Juventus are four points away from winning a ninth successive Scudetto and could secure top spot with victory over Udinese should Inter fail to beat Fiorentina on Wednesday.

Sarri is continuing to take the elongated campaign one match at a time, however, as he closes in on his first major honour in Italian football.

"I am a man of sport, which means that 'almost' is meaningless," he said. "We know that we need to pick up four points, which is difficult at the moment.

"We've got to focus on one game at a time, think of Udinese, then of Sampdoria, stay in the moment and continue fully aware this is a tough period for everyone."

Asked about recent criticism aimed his way following a three-match winless run, the ex-Chelsea boss insisted he is not bothered about the opinions of others.

"I evidently get on someone's nerves! I'm not particularly interested," he said.