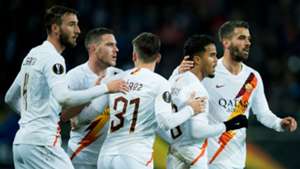 Roma will dedicate their first match following the coronavirus pandemic to medical staff around the world, with 5,000 free tickets to be given to frontline workers.

Elite sport has been halted by the global crisis, with more than 650,000 confirmed cases and over 30,000 deaths.

Only the United States has more cases than Italy, where Serie A has been suspended until at least May 3 - a date many still believe will be far too soon.

Roma last played at Cagliari on March 1, winning 4-3, but the club have a plan for their next game in front of a packed crowd at the Stadio Olimpico.

The Serie A side said they will dedicate their "first home match in front of fans after football returns to honouring and celebrating the medical workers who have been on the frontline of the battle against COVID-19".

A statement added it was "an extension of the club's 'HEROES' series on social media, which pays tribute to individual doctors, nurses and medics in Italy and around the world".

The promise of 5,000 free tickets for medical workers would "allow fans to show their appreciation for the selfless efforts of the medics during this crisis", Roma explained.

They will also honour workers who have lost their lives, introduce a reduced price rate for medical staff from the start of next season, and donate a proportion of each ticket sale to the club's fundraising campaign.

Roma president James Pallotta added: "It is impossible to overstate just how much we appreciate the work of the medical staff in Italy and around the world."

Pallotta has donated EUR75,000 to the club's COVID-19 fundraising project, which has brought in more than EUR530,000.