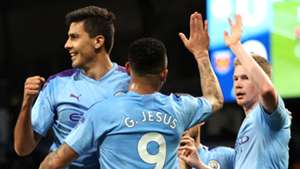 Manchester City will look to press the "reset" button over the summer, says Rodri, regardless of how successful their finish to the 2019-20 campaign proves to be.

The Blues have added another piece of silverware to their collection in the form of the Carabao Cup, with that trophy having been captured for a third successive year.

Pep Guardiola's side are also looking to mount a successful defence of the FA Cup, while bringing a long wait for Champions League glory to a close - ahead of a possible two-year ban.

The intention is to savour as many triumphs as possible, but that will not stop the Blues from looking to "regenerate" at the end of the season.

It is expected that further additions will be sought, despite the threat of a European suspension still hanging over the club, with questions being asked of key men on and off the field and their respective futures.

Rodri admits that City will look to start from scratch when planning for 2020-21, with the Spanish midfielder telling the club's official website after helping to secure League Cup glory: "Every season this team does a reset and tries to fight for everything and this is not easy, when there are people here that have won this competition four or five times.

"For me is the first time, but the rest need to regenerate and renew their motivation every season. That's the only way to keep growing and improving."

Rodri has been a useful addition to the City ranks since joining from Atletico Madrid and recorded his fourth goal of the season when netting the Blues' second in a 2-1 win over Aston Villa at Wembley on Sunday.

The 23-year-old has never been so prolific and added on his goalscoring exploits: "It's a surprise for me!

"I'm not used to scoring goals but if it happens and it helps the team and it is a final and to win it, it's something fantastic.

"But what makes me happier is that we've won a trophy and personally I'm growing and feeling very involved in this squad full of great people and amazing professionals."

City are now turning their attention to an FA Cup fifth-round clash with Sheffield Wednesday, with that contest set to be followed by a Premier League derby date with arch-rivals Manchester United.

The Blues will then take in a home meeting with Burnley before welcoming Real Madrid to the Etihad Stadium for the second leg of a heavyweight Champions League last-16 showdown.

"It's been a very important week for us, but this is not over yet," Rodri said.

"We still have a few months of the season to go and that great result in the Champions League and the fighting spirit of the team says lots of good things about us, a team that never surrenders.

"Winning the Carabao Cup three times in succession speaks a lot about our ambition, and our collective desire to keep winning."