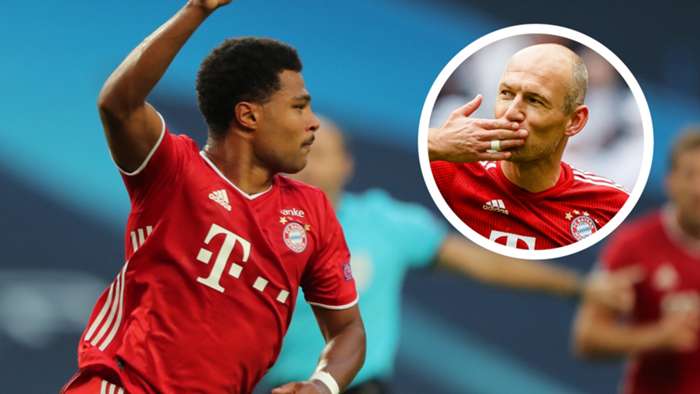 As recently as last summer, Bayern Munich were still publicly looking for a successor to Arjen Robben

Serge Gnabry had started ahead of Robben under Niko Kovacin 2018-19, yet Karl-Heinz Rummenigge was giving interviews claiming he believed Manchester City's Leroy Sane "would be the successor of Arjen Robben and Franck Ribery."

Sane finally signed for Bayernt this summer, but while he was watching from the sidelines in Manchester over the course of the 2019-20 campaign, Gnabry was busy becoming the rightful heir to Robben.

On Wednesday night in Lisbonhe solidified his claim, opening the scoring with a goal straight out of the Dutchman's playbook, cutting in from the right before unleashing an unstoppable shot with his left foot.

Despite Lyon having lots of opportunities in the Bayern area thanks to their ability to bypass the high defensive line, the Ligue 1 outfit were 2-0 down by the 33rd minute as Gnabry got his name on the scoresheet once more,

Robert Lewandowski went into the game leadingthis year's Champions League top scorer race with 14 goals, but scuffed a brilliant chance for another, allowing Gnabry to react fastest to ensure the ball crossed the line.

Having scored four goals in London against Tottenham in the group stage, Gnabry took his own European tally to nine in 2019-20, the highest by an active player in the competition behind Lewandowski, who did get his goal with a late header from Joshua Kimmich's cross.

In fact, Gnabry and Lewandowski's combined 24goals has seen them beat the record previously set by Cristiano Ronaldo and Gareth Bale in 2013-14 for the most prolific pairing in a single Champions League season.

When Bayern signed Gnabry in 2017, some people were surprised at the move despite a solid season at Werder Bremen following his exit from Arsenal.

The winger decided to leave the Gunners due to a lack of first-team opportunities having been judged not good enough to be a starter by Tony Pulis while on loan at West Brom.

Bayern beat Hoffenheim and RB Leipzig to his signature from Bremen, but immediately loaned him out to the former as they already had Robben on the books, as well as the man they hoped would be Robben's successor:Douglas Costa.

Costa was sold to Juventus the following summer and Gnabry's 10 goals on loan at Hoffenheim were enough to keep him in Munich, despite the club's bosses still eagerly searching for a long-term replacement for Robben.

Even after Gnabry netted 13 goals in all competitions in his first proper season at Bayern, then-coach Kovac admitted that the club needed four new players, with the wing positions requiring strengthening after the departures of Robben and Ribery

Those public statements did not affect Gnabry's form or his confidence, however. He has always been determined to prove himself, and that is why he left Arsenal back in 2016 despite Arsene Wenger being eager to extend his contract.

“I came with the goal of getting games," Gnabry told Goal last year. "That's what I've been working for from the beginning and that's the way it should stay.”

This season, he has kept his starting role but also become more influential as Hansi Flick took the reins from Kovac.

His double against Lyon brings him to 23 goals in 45 games in all competitions, making him Bayern Munich's second highest-scorer in 2019-20 whilealso equalling Robben's best-ever season for the club.

Robben's greatest moment for Bayern came in 2013when he scored the winning goal in the Champions League final.