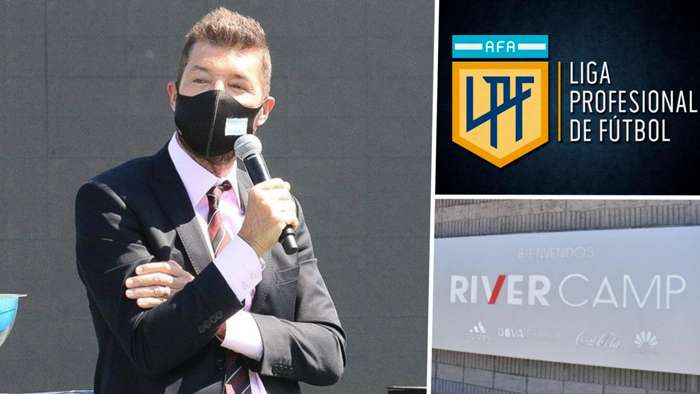 It may have taken seven months, but domestic Argentine football finally picked up where it left off last weekend with a new format, new name and the same old teams.

And while the Albiceleste legend's celebration was one of the big stories of the round, the real drama was going on off the field.

The new Liga Profesional de Futbol (LFP) has come into being in strained circumstances, with itat loggerheads with one of its biggest teams.

During the lockdown in the Argentine game, which ran from mid-March to the last weekend of October, giants River Plate took the opportunity to carry out remodelling works on their Monumental home.

The venerable old ground was closed for business and the pitch ripped up while down the road in Avellaneda, Independiente's Libertadores de America stadium paid host to the Millonario's Copa Libertadores group clashes behind closed doors.

For the new Copa de la Liga Profesional, however, a stop-gap cup competition designed to fill up the calendar before the league proper starts in 2021, River wanted to keep things closer to home.

The club filed a request to the LFP asking for their upcoming games to be played at their lavish River Camp training facilities.

As plush as the complex is, however, it lacks several of the components necessary for professional football, not least stands; leading to a reply in the negative from the governing body.

“We have to take care of Argentina's football brand amongst all of us,” league vice-president Cristian Malaspina stated in a now infamous chat with TyC Sports. “I have no doubt that we will find a rapid solution so River can find a stadium at little cost.”

But this did not occur, and with the situation further complicated by Argentine FA president Claudio Tapia -who stated he would not have a problem with using River Camp -the club stuck to their guns, and the LFP's final refusal did not arrive until Saturday afternoon, barely 24 hours before the Millo were due to face Banfield.

Despite the hilarious suggestion included in the statement that River could email in their alternative venues in time for kick-off – a proposal which swiftly led to hundreds of ironic replies from supporters – the game was forced into postponement, finally going ahead on Tuesday once more in Independiente's ground.

In the meantime, just months after its formation, the LFP has found itself in a messy, embarrassing dispute which has caused questions over its ability to run the ever-unpredictable world of Argentine football.

Admittedly, its case was further hindered on Sunday when, during Defensa y Justicia's loss to Colon, the electronic substitutions board broke down and forced officials to notify personnel changes by holding up their fingers. As many were quick to point out, it was not a scene that would do much to take care of the brand.

Relations between the new body, led by media mogul and ex-San Lorenzo president Marcelo Tinelli, and River had already been strained by another ongoing battle, this time against none other than the immensely powerful Disney corporation.

Early in October the LFP, which came to life during a lockdown Zoom call among club presidents to replace the moribund Superliga format, announced that Fox Sports would be stripped of its half of the top-flight television rights due to an outstanding anti-monopoly case in Argentina related to its merger with Disney-controlled ESPN, giving the media outlet unprecedented control over the nation's sporting airwaves.

Fox responded by obtaining an injunction that allowed the channel to broadcast its share of the weekend action, but further litigation and legal turmoil seems inevitable.

On its side are two powerful allies: River and Boca Juniors, who claimed that they were not advised of the decision and protested in a rare joint-statement signed by the historical rivals.

“All the clubs were consulted about the television issue and most agreed with what the AFA decided,” responded Independiente chief Hugo Moyano, adding to El Destape: “I don't know why Boca and River feel they have been harmed.”

The answer to that question most likely lies in the broadcasting contract initially agreed with Fox and fellow media giant Turner (whose standing has been unaffected by these recent developments).

Under the terms of the deal the two Superclasico rivals were afforded preferential treatment; since 2017 and the advent of the Superliga, the pair received almost double the annual television revenue of their less-heralded rivals.

“Boca and River want to transform Argentine football into Spanish football,” Lanus president Nicolas Russo fired to Ole in the wake of the two clubs' protest, suggesting that they hoped to emulate the same privileged position enjoyed by Clasico rivals Real Madrid and Barcelona.

Any move to attack the spirit, if not the numbers themselves, of the current deal has been strongly resisted, although Argentina's economic crisis, the massive devaluation of the peso against the dollar and now Covid means re-negotiation of rights is a universal plea across the league.

The River Camp furore is likely just the opening salvo in this new battle in Argentine football, one which pits the nation's two top clubs at loggerheads with organisers at the most sensitive of times.