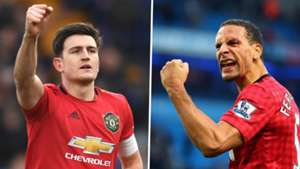 Rio Ferdinand "took the philosophy of defending to another level", according to Harry Maguire, who says the ex-Manchester United star helped him realise what it takes to be a great all-round defender.

Maguire has emerged as one of United's most important players since completing a record-breaking move to Old Trafford from Leicester last summer.

The 27-year-old has racked up 39 appearances across all competitions this season, scoring two goals, helping United fight for a top-four finish along with success in both the FA Cup and Europa League.

Ole Gunnar Solskjaer named Maguire United's new club captain after Ashley Young was sold to Inter in January, and he has since played a key role in a revival which has seen the Red Devils embark on an eight-match unbeaten run.

The England international has now revealed that he has always drawn inspiration from Ferdinand, who enjoyed a hugely successful spell at Old Trafford between 2002 and 2014.

Maguire says he learned the art of bringing the ball out from the back from a man who also was once the most expensive defender in the world, while admitting to being a great admirer of Chelsea great John Terry for similar reasons.

"I think Rio took the philosophy of defending to another level. John Terry was always good on the ball.

"He had the range of passing, left and right foot, but I think Rio took the philosophy of you do have to start bringing the ball out from the back, stepping in and committing players.

"He was really great to watch and from my era that's the person I'd probably say made me open my eyes and think that's what you need to be a top, top centre-back in terms of you've got to start helping your attackers as well.

"Like I've said, the main thing is defending but the bonus of playing through the lines and playing good passes to start attacks is important too."

Maguire added on how he has attempted to follow Ferdinand's blueprint at Old Trafford: "The best thing is just to be calm and composed and trust your ability.

"A lot of dribbles start with good defending, in terms of intercepting passes, but I can manipulate the ball quite well, especially for a big lad.

"It's something that I've always had as part of my game. I do like to dribble the ball out and start attacks off. It sets the tempo for our team.

"[Rio] probably did it most out of anyone, and it was quite unusual at the time, but he really stood out when he did it."

Solskjaer left Maguire out of his squad for an FA Cup win over Derby on Thursday, and he could also be a doubt for a derby date with Manchester City on Sunday as he continues to recover from a twisted ankle.