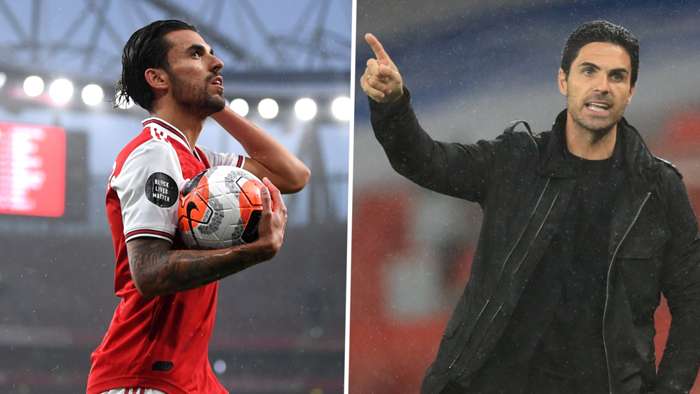 In the build up to Tuesday night’s meeting with Leicester, Arsenal head coach Mikel Arteta admitted that he was open to keeping Dani Ceballos for at least another season.

Arteta said that the Gunners need to talk to Read Madrid about the midfieder’s future and those talks might have now taken on extra significance following the Spaniard’s impressive display during the 1-1 draw with the Foxes.

For 80 minutes, this was Ceballos at his best. There were echoes of his full debut against Burnley way back in August, when he had the Emirates crowd on their feet as he pulled the strings during a 2-1 victory.

And while there may not have been any Arsenal fans inside the stadium on Tuesday night, there would have been plenty watching at home toasting the Spaniard’s display as he maintained his excellent post-lockdown form.

For the final 25 minutes of the first half, Arsenal sparkled and Ceballos was at the heart of everything.

The pass that released Bukayo Saka in the run up to Pierre-Emerick Aubameyang’s opener was a thing of beauty, as was the turn that started a move that led to Alexandre Lacazette having a header saved by the excellent Kasper Schmeichel.

While Ceballos was on the pitch, he had 68 touches– 10 more than any other Arsenal player. He also made the most passes (44) and put in the most crosses (6).

But it was just going forward where the Spaniard impressed. Defensively, he was excellent too and, just as he has in recent weeks, he provided excellent cover for the defence alongside Granit Xhaka.

Ceballos gained possession 11 times, more than any other Arsenal player, and competed in nine duels, a number only Xhaka and David Luiz could better.

It was no surprise that when he was replaced, Arsenal conceded the equaliser just four minutes later, with Jamie Vardy netting from close range.

Ultimately, it was a disappointing result for Arsenal, having led for so long. But Leicester will feel they were deserving of their point for the way they played in the second half.

Arteta will be unhappy with the decision that saw Eddie Nketiah sent off with quarter of an hour remaining. The substitute had only been on the pitch for four minutes when he was shown a red card for a high tackle on James Justin.

Nketiah was initially only shown a yellow card by Christopher Kavanagh, but the decision was upgraded to a red after Kavanagh was advised by VAR to watch the incident again on the pitch-side monitor.

Arteta was clearly furious at the time, but upon reflection he will probably be more frustrated by the good chances that went begging when his side were dominant before the break.

The 25 minutes which followed Aubameyang’s opener were arguably the best Arsenal have produced since Arteta arrived. The front three of Aubameyang, Lacazette and Saka were excellent, with Ceballos pulling the strings behind.

Schmeichel twice denied Lacazette with excellent saves, although on the second occasion, the Arsenal striker shouldn’t really have given the Leicester keeper the opportunity to make the stop, after he had been picked out by Hector Bellerin’s cross.

The second half saw a much improved Leicester, with Arsenal appearing to tire as the game wore on. And when Nketiah was dismissed 15 minutes from time, an equaliser felt inevitable.

It eventually came on 84 minutes when Demarai Gray’s low cross found it’s way to Vardy at the back post and he tapped the ball past Emiliano Martinez for his 10th goal in 10 appearances against Arsenal.

It was a frustrating end to the evening for Arsenal, who will feell like it was two points lost.