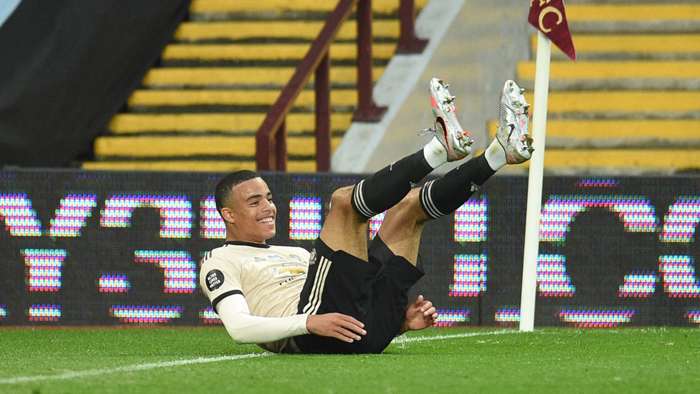 On a night when Manchester United made Premier League history,another moment of magic from 18-year-old Mason Greenwood inspired them to victory.

United cruised to this3-0 victory over Aston Villa and it was Greenwood again providingthe standout moment.

Solskjaer has been keen to downplay any links between Greenwood and great players of United’s past but it’s now hard to ignore the comparisons between the teenager and the club’s all time leading goalscorer Wayne Rooney.

‘Remember the name!’, commentator Clive Tyldsely roared when Rooney burst onto the scene for Everton in October 2002 when he washailed as the coming force in English football.

Greenwood had just turned one and will have had no idea of Rooney’s heroics that day against Arsenal. But now, 18 years later,he has taken on the mantle of the most exciting young talent to push through in a generation.

His work off the ball has been praised as much as his goal scoring and it was another confident performance from the attacker, who has nailed down his position in the starting XI. But for all the praise of his work rate and pace it is his goals which are setting him apart from the rest.

Spare a thought for any defender trying to deal with him.A coach might demand that a centre-back shows an attacker onto his weaker footbut Greenwood doesn’t have one.

Some wonderful work from Martial in the build up to United's second goal,after winning the ball back off Tyrone Mings, preceded a sublime finish from Greenwood. From outside the box - andwith his supposedly weaker right foot - he beat Pepe Reina with a rocket of a strike.

That brought his total to 16in all competitions and nine in the league;the last teenager to score that many in a single league campaign was a certain former United No.10 in Rooney.

Solskjaer might not want to attract thecomparisons but the evidence is there for all to see. The homegrown prospecthas the talent that could be key to United’s fast flowing attacking front line for years to come.

His goal, which came in added time in the first half, settled a tie which at first United were slow to get in to. Solskjaer named an unchanged side for the fourth consecutive league game, the first time United had done so since November 2006, but their effortswere fruitless early on despite the possession they enjoyed.

While Villa pressed the visitors in the opening exchanges, Unitedlooked lethargic and not at all like the fast attacking team we have seen since the restart.

Anwar El Ghazi and Douglas Luiz both had efforts from range which weren’t anything to test David de Gea. On another day Jack Grealish would have given them the lead when he got on the end of a great ball from Ezri Konsa but the United target could only volley his effort over the bar at the far post.

Paul Pogba was then caught in possession and Trezeguet fired a warning sign as his effort ricocheted off De Gea’s post.

A controversial penalty decision moments later, however, ensured United took the lead. Fernandes pirouetted on the ball and brushed intoKonza as he did so. The Portuguese was looking for the contactbut VAR backed referee Jon Moss’ decision. Fernandes duly dispatched from the spot for his seventh league goal of the season.

United sparked into life after the goal with a power injected into their front line that had been missing in the opening half hour. Greenwood, Martial and Rashford all had driving runs into the box that had to be dealt with by Reina before Greenwood scored United’s second before the break.

Solskjaer will say he is not interested in records but becomingthe first side to win by a three-goal or higher margin for four consecutive league games is some feat, especially a team that not so long ago was looking for consistency and creativity.

Pogba, who put in another classy performance in the hub of United’s midfield, got the third. A Fernandes corner was delivered straight to the Frenchman waiting on the edge of the box. He took one touch before perfectly guiding his curled shot into the bottom corner.

United were in cruise control by that stageand it gave Solskjaer the opportunity to rest his key men. Aaron Wan-Bissaka, Greenwood, Martial, Matic and Fernandes all came off ahead of another busy week.

The United boss might decide to rotate his squad with three big fixtures to come but one thing’s for sure; Greenwood’s going to be key. Remember the name.