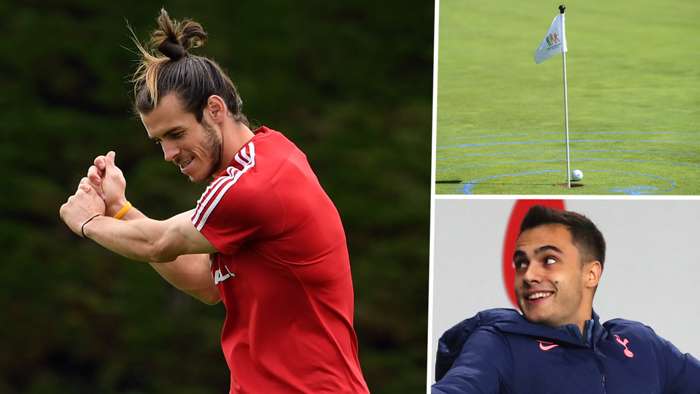 Sergio Reguilon has claimed that Tottenham informed him they had created special golf holes at their training ground especially for Gareth Bale following his arrival from Real Madrid.

The former Southampton winger struggled for form and fitness in his last couple of years with the Blancos, falling out of favour with head coach Zinedine Zidane in the process, leading to question marks over his future at the highest level.

He also saw his commitment to Madrid's cause called into question amid his well-documented love of playing golf, and risked the wrath of supporters by holding up a'Golf, Wales, Madrid' banner while away on international duty.

Bale has been given the chance to get his career back on track in familiar surroundings and scoredhis first goal for Spurs following his return to wrap up a 2-1 victory for Jose Mourinho's side against Brighton on Sunday.

Reguilon, who left the Bernabeu to join Tottenham on a permanent deal in September, thinks Bale seems far more content in England than he was in Spain, and has even claimed that the club are encouraging his golfing habit in order to key him happy.

The Spanish full-back told Cadena Ser of his team-mate's improved mood since returning to Spurs: "He seems different to me. The language is everything for him. He speaks Spanish well, it's not bad, a bit like me in English, but communication, the habits, mean he's happier in England... I have no idea if he'll return (to Madrid).

"What most surprised me is at Spurs' training ground there are golf holes. I asked about it and they told me they were put there for him! They're short holes, maybe 30 metres. I couldn't believe it!"

Reguilon was likely referring to the mini-golf green which has reportedly been in placeat Tottenham's training ground for many years.

The 23-year-old is also thoroughly enjoying the early stages of his career with the north London cluband has already warmed to Jose Mourinho due to a combination of his communication skills and intensity on the training pitch.

Asked to offer an insight into his relationship with the Portuguese, Reguilonresponded: "Great... I like this kind of demanding, intense coach. When we don't do what he wants he gets angry, like any coach... he's really close to the players."

The former Madrid star went on to discuss how he hasadjusted to life in England before addressing the possibility of returning to the Bernabeu in the future.

"It gets dark at five o'clock! It's a different league and style but I adapt well to new situations... I get on great with my team-mates. Son Heung-minand Pierre-Emile Hojbjerg are good guys," he added.

"Madrid is my home and where I grew up. In the future, you never know but the possibility is there... I didn't speak to the boss (Zidane), it was more with the club. I know what they think of me, I had to take a decision.