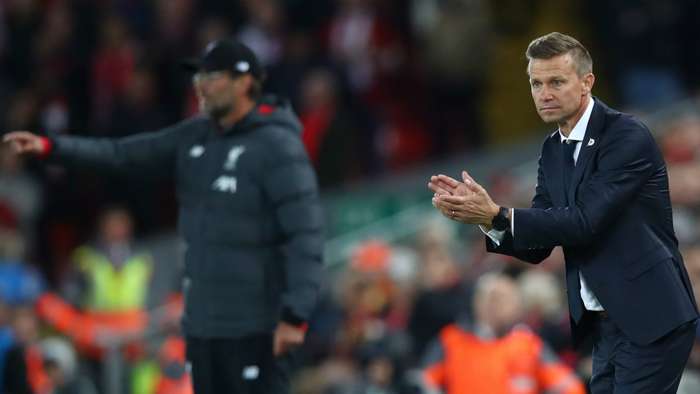 Liverpool take on Red Bull Salzburg in Austria as part of their pre-season preparations on Tuesday and the reigning Premier League champions boast threeex-Salzburg players in their ranks.

Salzburg's head coach, American Jesse Marsch,believes Liverpool manager Jurgen Klopp looks to Salzburg and those in the Red Bull systemsdue to their similar styles of play.

"Klopp doesn’t call me directly! But I was in the office when they first called about Taki and it was before we played them in the second Champions League game and it is clever from them," Marsch toldGoal.

"I have even often said to our scouting departmentmaybe the best way of thinking about how to scout players is to think about what leagues and clubs around the world play a similar brand of football to what we do.

"Maybe that’s a good starting point to think about how we can find good young players to integrate into what we do. Essentially, that’s the strategy that Jurgen Klopp has adopted and he has had success with that.

"I've been asked before about which players from Leipzig and Salzburg could join Liverpool right away, off the top of my head, I could pick five players from each side that would fit into Liverpool perfectly. Then, it would just be about adapting to the level.

"That’s similar to what Taki Minamino is going through right now, he is equipped with all the tools to play in that team and it is just about adapting to the level which things are done.

"I think this team takes it as a big compliment that a club like Liverpool and a coach like Jurgen Klopp thinks so highly of us."

Despite having won the Austrian double last year, Marsch and his Salzburg team are best known in the UK for having comefrom 3-0 down at Anfield last October to level at 3-3 following the coach's famous half-time team talk.

Mohamed Salah would go onto make it 4-3 before the end but the visitors drew widespread praise for their fighting spirit and exciting football.

Marsch believes theseupcoming friendlies will further help his side improve in Europe as he bids to get one over on the manager he most admires.

"Before we played them last year we had a connection because we have some ex-players there already," he added. "Jurgen Klopp played with our goalkeeping coach at Mainz. There was already a fairly strong connection.

"For me, I never had any specific club that was my favourite in the world. I like to look around and see who is doing a good job and what kind of football they are playing.

"When I first took this job, they asked me what trainers and clubs do I think are right now doing a great job and my answer was Jurgen Klopp and Liverpool.

"It has so much to do with his way of leading his group and the way he coaches his team to play. It fits a lot with the things we are trying to do here. It is a little bit different in some of the details in both who I am, who our club is and the way we play, but at the same time, I think there is an appreciation.

"I have always had an appreciation. The beauty of us competing together is that I think Liverpool as a club and Jurgen Klopp as a coach gathers more respect for what we do. So, in the end, an opportunity to play against each other again, when it came up was exciting for us.

"Let’s see how much we learned in our games against them and if we can perform a little bit better, even though it is a friendly."

Still, Salzburg continueto produce talent from their state-of-the-art Red Bull Academy, with their team having reached the UEFA Youth League semi-final having already won the competition in 2014.

Marsch is confidentthat his team will continue to find players like Haaland and Minamino with an extensive global database that deletes players upon their 22nd birthdays.

"A lot of our credit goes to our scouting team and network," he added. "I have sat in Red Bull scouting meetings here in Salzburg and they have only talked about 15 and 16 year olds.

"That’s the first step often to find the best young talent that are also naturally built to play the way we want to play. Can they go into our academy, Liefering and then Salzburg?The more that we can find the players to do that effectively, then the more we feel like we are doing our job.

"Then, there’s also the need for 18, 19 and 20-year-old players to come in and in this transfer window, signing Oumar Solet from Lyon is the best example of that. In our database, the day a player turns 22, then he is kicked out.

"It isn’t that we haven’t in the past gone after players who are older than that but usually it is because we already know that player, maybe he was part of our teams and he has gone somewhere else and it is time to come back.

"What I have learned from the Red Bull umbrella is that it is about having an identity, sticking to it and having everybody with expertise in their own area of the business and understanding how they fit together is our key to success.

"That makes sense and isn’t complicated. What is complicated is making sure all the pieces fit together so everybody can thrive."

Amid their domestic domination, Marsch is using friendlies like the ones against Liverpool, Ajax and Nice to ready his team for a return to the Champions League. With Austria already conquered, Salzburg want to become a force in Europe.

"The qualifiers to get back into the Champions League is what is driving us in the short term," he concluded.

"We don't just want to arrive one time in the Champions League, but to become a Champions League club that is there every year. It is a difficult process, especially here in Austria, but that’s our goal."