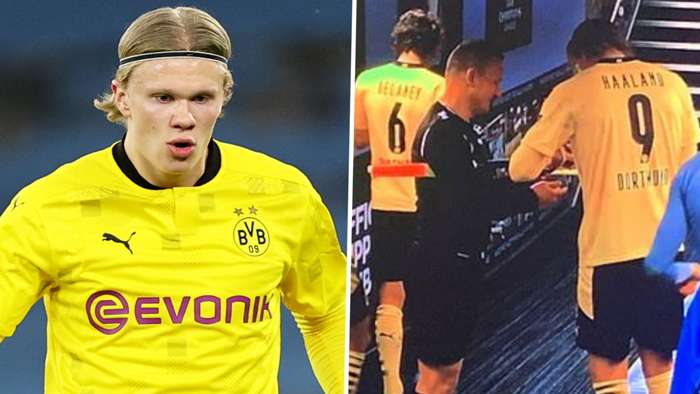 The real reason for Champions League match official Octavian Sovre chasing down Borussia Dortmund striker Erling Haaland to get his autograph after a European clash with Manchester City has been revealed.

The Romanian linesman raised eyebrows after a 2-1 win for the Blues at the Etihad Stadium when he was seen requesting the Norwegian forward’s signature in the tunnel, leading to questions being asked of his professionalism.

It has, however, emerged that Sovre collects autographs from leading sports stars in order to auction them off for a charity in his native Romania that supports young adults suffering from severe autism.

SOS Autism Bihor Association president Simona Zlibut has told Gazeta Sporturilor: “That autograph is for a noble cause.

“Maybe people dont know, but Tavi (Sovre) is directly involved in supporting this Association. He has helped us a lot all these years!”

Haaland had made his way from the field and was heading back to the dressing room when he was approached by Sovre.

He happily signed red and yellow cards before wrapping his arm around the match official in question.

Sovre appeared to have broken an unwritten rule that prevents men in the middle from interacting with professional sportspeople on a personal level.

It has now been revealed, though, that the Romanian was not seeking out any individual gain.

The report from Gazeta Sporturilor claims that Sovre had also been hoping to collar City boss Pep Guardiola, but could only catch up with Haaland.

Ex-City midfielder Owen Hargreaves, who was covering the game for BT Sport, said of Sovre’s actions – with Dortmund midfielder Jude Bellingham having seen a first-half goal controversially ruled out for a supposed foul on Ederson: “They had a difficult first-half and they got a lot of things wrong in that first-half.You can be a fan, but you cant do that in front of the other players, it just doesnt look right.”

Former Blues defender Joleon Lescott added: “Theres never a right time for that, it just doesnt bode well for the officials. Its a childish thing to see.”

City boss Guardiola told reporters at a post-match press conference: "They told me, I didn’t see it, maybe he’s a fan.

"Why not? The referees were brilliant, the game was not a problem. Not a penalty, the VAR said that. And the leg is higher from Bellingham. So they were perfect and it was correct. Maybe it was for his son or daughter.

"It happens but they did a good job, that’s all. Nothing happened."

The 47-year-old is a vastly-experienced assistant referee who has spent many years plying his trade at the very highest level.

The 2020-21 campaign is his 17th on FIFA’s list of match officials, so he is no stranger to rubbing shoulders with world football’s elite.