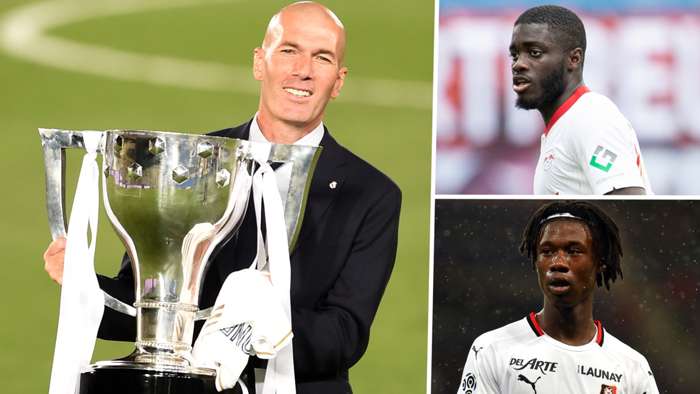 The enormous impact Covid-19 has had upon football's finances is best illustrated by Florentino Perez ruling out any major signings atSantiago Bernabeu this summer.

"The situation is really bad," he told El Transistor just over a week ago. "It's hard to ask the players to take a pay cut to help deal with the coronavirus crisis and then make signings. That can wait.

"Madrid will sign the best again when the situation changes."

Of course, that is not to say that there will not be plenty of movement in and out of Madrid during the upcoming transfer window...

Indeed, it was Madrid's superior strength in depth which saw them surge clear of Barcelona during the physically demanding conclusion to the season caused by the coronavirus pandemic.

Sergio Ramos was a key performer during the run-in, but the captain is 34 now, so Madrid would consider signing a new centre-half during the off-season.

RB Leipzig's France Under-21 international Dayot Upamecano is of great interest, but a move is only likely if Nacho is sold this summer.

Ajax ace Donny van de Beek also remains under considerationgiven the midfield could do with rejuvenation -even accounting for Fede Valverde's emergence this season -but there is no chance of long-time target Paul Pogba arriving in the Spanish capital.

Madrid would simply not be willing to pay the many required to sign the France international, who could now extend his contract at Old Trafford anyway.

Madrid, however, do need to sign a defensive midfielder, given they presently have no cover for Casemiro.

Rennes' 17-year-old sensation Eduardo Camavinga would, therefore, be an ideal addition, but a deal will hinge upon the Ligue 1 outfit lowering their asking price.

At the start of the month, Rennes sporting director Florian Maurice said they would even reject a bid of €80 million (£72m/$89m) for Camavinga.

Elsewhere, a forward will only be signed if Luka Jovic or Lucas Vazquez leaves before the window closes. Zidane has coaxed an incredible campaign out of Karim Benzema, while the hope is that Eden Hazard is now over the injury problems that ruined his first season in La Liga.

Real remain convinced that Brazilian youngsters Vinicius Junior and Rodrygo are destined to do great things at the Bernabeu, while it should not be forgotten that Martin Odegaard and Takefusa Kubo are still on the champions' books.

Norway international Odegaard will spend another year at Real Sociedad, where he has excelled, while 'The Japanese Messi' Kubo is set for another loan move, after shining for relegated Mallorca in 2019-20.

Essentially, there is no pressing need to spend a fortune to strengthenan attack that boasts plenty of promising players already.

Money has already been made from selling Achraf Hakimi this summer, who has joined Inter for €40m (£36m/$45m).

The versatile Morocco full-back had enjoyed a brilliant two-year stay at Borussia Dortmund but, according to his agent, Zinedine Zidane saw no need for Hakimi at Madrid.

Consequently, it is now likely that Alvaro Odriozola will return from Bayern Munich to provide cover for Dani Carvajal.

Marcelo, meanwhile, should remain to battle Ferland Mendy to beReal's first-choice left-back, givenSergio Reguilon is expected to extend his stay at Sevillaafter a fine campaign at the Ramon Sanchez Pizjuan.

For a long time, it appeared as if Luka Modric was heading for the exit door, but he finished the season with a flourish and should stick around for another year before his contract expires in 2021.

Reinier Jesus, though, is on the verge of joining Bayer Leverkusen on loan for 2020-21, as Madrid look to secure the teenage Brazilian midfielder some regular game time in one of Europe's top leagues.

Brahim Diaz is in a similar stiatuion but he is likely to remain in Spain, with Getafe his most likely destination at the time of writing.

Madrid, though, will be hoping to find permanent homes elsewhere for Dani Ceballos, Mariano Diaz, James Rodriguez and Gareth Bale – all of whom have been deemed surplus to requirements by Zidane.

The coach has never seen eye to eye with Ceballos and, if cash-strapped Arsenal can find the money, the Spaniard will remainat the Emirates either permanently or via another loan deal.

Mariano could return to France, while Real should have little trouble attracting offers for Jamesif they make the Colombiaattacking midfielder available at a reasonable price.

Offloading Bale will be far more difficult, though, given the Wales starhas made it clear that he is perfectly content to see out the final two years of his contract on the Madrid bench should no other club be willing to match his colossal wages.

No matter what happens between now and the start of next season, do notexpect Zidane to radically change his preferred starting line-up from this season.

The back five is virtually set in stone, with Mendy having now moved ahead of Marcelo in the pecking order.

Valverde is also now a better option in midfield than the ageing Modric, while Zidane seems to prefer the more clinical Rodrygo to the talented but inconsistent Vinicius– at least for now.

The point is that Zidane already has plenty of options in terms of team selection. All he islooking for now is to fill the few remaining holes in his squad.

So, the primary goal this summer will not be signing superstars,but quality reserves with great potential.