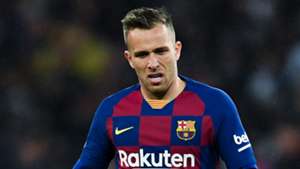 Real Madrid did not deserve their 2-0 El Clasico victory over Barcelona, according to Guillermo Amor.

Madrid leapfrogged Barca atop the La Liga table thanks to second-half goals from Vinicius Junior and substitute Mariano Diaz on Sunday.

Vinicius opened the scoring in the 71st minute before Mariano sealed the win in the second minute of stoppage time at the Santiago Bernabeu.

Madrid moved a point clear in the league standings but Barca director Amor told Movistar: "They pushed up and they pressed us. Their idea was to stop the game. They pressed and created chances.

"It proved costly for us, but I don't think they deserved the win. We were very dominant, they hit us quickly."

Amor added: "If we consider the first half then I think it was a very good performance. Very good. We had the game under control and had chances, but missed them.

"If you forgive a team like Real Madrid they'll have their chances. Once they scored they saw they could win and were encouraged."

It was a quiet evening for Barca captain and superstar Lionel Messi in the Spanish capital, where the six-time Ballon d'Or winner struggled to make an impact.

"He was good," Amor said. "He was great in the first half. He created, played and played.

"But when you lose, everything seems negative. We weren't bad though. We had a great first half and were the better team. But then things went crazy and we lost control."

Barca appeared to have weathered the storm into the second half and nearly scored against the run of play when Martin Braithwaite's shot was cleared off the line by Raphael Varane.

But Vinicius deservedly fired the hosts in front after being played in behind by Toni Kroos and slotting past Marc-Andre ter Stegen with the aid of a telling deflection off Gerard Pique.

And after near-misses from Pique and Vinicius at either end, Mariano sprinted past Samuel Umtiti and scuffed a shot over Ter Stegen just 50 seconds after being introduced from the bench to seal a vital win.

Barcelona's next match will come in La Liga against Real Sociedad on Saturday, while Real Madrid travel to Real Betis a day later.