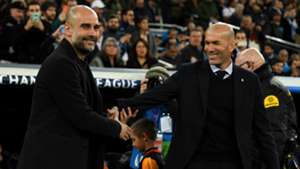 Real Madrid are being backed by club legend Predrag Mijatovic to emulate the Champions League efforts of Manchester United from last season and send Manchester City crashing out of Europe.

The Blancos have it all to do in the second leg of a heavyweight last-16 encounter as, despite taking the lead at Santiago Bernabeu, Zinedine Zidane saw his side crumble against the Blues to suffer a 2-1 defeat on home soil.

They must now score at least twice at the Etihad Stadium on March 17 to book a place in the quarter-finals.

Madrid do not need to turn the clock back far to find inspiration in that quest, with City's arch-rivals United having completed a stunning turnaround on the road at Paris Saint-Germain in 2019.

Mijatovic believes Real are capable of doing likewise in Manchester, telling Marca: "Winning away from home in the Champions League will not be straightforward, and even more so against City.

"Last season it was [Manchester] United who managed to defeat [Paris Saint-Germain]. Why not Real Madrid?

"We will have opportunities throughout the game. Real Madrid have not said the last word.

"You have to score two goals at least and that should be the target. If they score, nothing changes. Nothing is lost."

Davor Suker, another Champions League-winning striker from Real Madrid's past, also believes that Zidane's side are capable of turning a meeting with City on its head.

He believes victory in a Clasico clash with Barcelona last time out has helped to raise morale in the Spanish capital, with a domestic and continental double still there to be chased down.

The legendary Croatian said: "Many factors influence football and that triumph against Barcelona will have filled them with confidence and self-esteem.

"We have to take advantage of what happened on Sunday at the Bernabeu. We must not lose top spot under any circumstances.

"La Liga has to be ours. What seemed difficult has been achieved and now it is time to endure [for the final 12 games].

"Barcelona have also had a hard time and they are now behind. Losing in the Clasico always leaves a mark."

Before facing City, Real have La Liga outings against Real Betis and Eibar to take in, with the first of those set to take place on Sunday.