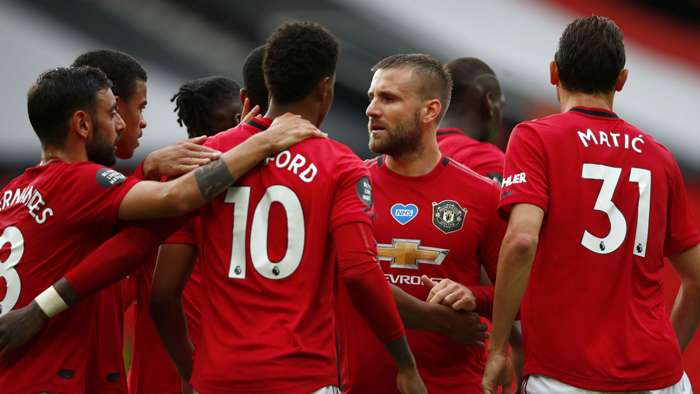 Marcus Rashford sees “exciting times” for Manchester United, with an impressive 5-2 victory over Bournemouth seeing the Red Devils stretch their unbeaten run to 16 games across all competitions.

Ole Gunnar Solskjaer’s side have been imperious form since the turn of the year, with a stunning resurgence enjoyed.

Having once appeared to be in danger of missing out on a top-four finish once again, United are now very much back in the hunt for Champions League qualification.

They are also through to the semi-finals of the FA Cup and last 16 of the Europa League, with major silverware there to be shot at.

The odd scare was suffered during a Premier League clash with Bournemouth at Old Trafford, but three points were eventually secured with the minimum of fuss.

Rashford was back among the goals in that contest – reaching 20 for the season in the process – and admits a feel-good factor has returned to the Red Devils’ ranks.

He told BT Sport: "The lads enjoyed it today. Definitely exciting times. It doesn't matter who scores as long as we are scoring and picking up points in the table.

"It is always positive for teams if their forwards are scoring. It is important now to push on until the end of the season."

Rashford said of the 18-year-old frontman: "Left foot, right foot he can finish. Both sides are comfortable for him.

"I don't want to put too much emphasis on him, just let him play his football and that he is what he does. It is a big bonus to have him in the squad."

Solskjaer echoed those comments in his assessment of the youngster, saying: "He is a fantastic goalscorer.

"The moment he got the goals, they were very important moments for us. He is a very, very talented boy and we will nurture him and manage him as best we can."

Having seen his side sweep aside another rival, Solskjaer was quick to hail the collective effort of those at his disposal.

The Norwegian did, however, reserve special praise for his frontline, adding: "Very, very happy with today - with the energy in the team and the goals we scored. I think that was a game for the fans. That is definitely one the Stretford End would have enjoyed.

"They are on the same team and working towards one common goal. That is one of the positive things about the forwards they are good friends and keep challenging each other."

The only piece of bad news on another positive day for United was a slight knock suffered by Swedish centre-half Victor Lindelof.

Solskjaer said: "He struggled with his back but hopefully won't be too bad."