Rashford could be the first Man Utd player to get a standing ovation at Anfield, says Liverpool star Robertson

Rashford could be the first Man Utd player to get a standing ovation at Anfield, says Liverpool star Robertson 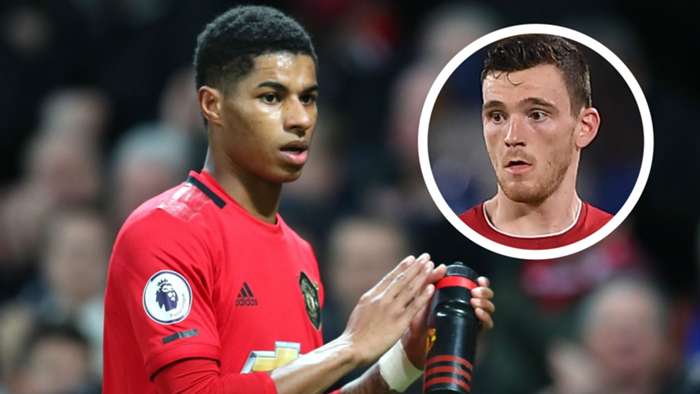 Liverpool star Andy Robertson has said that Marcus Rashford could be the first Manchester United player in history to receive a standing ovation from the Anfield crowd after the work the striker has done to help disadvantaged children and families in the UK.

Liverpool and United are mortal enemies on the pitch, with their fierce rivalry often making for heated spectacles whenever they meet. Regardless of that fact, Robertson believes that Rashford's actions off the field mean that he would be more than deserving of applause on Merseyside.

“The two words that everyone's saying during the pandemic are 'Marcus Rashford',” the Scotland captain said in an interview with The Times. “He made politicians overturn the decision not to extend free school meals because he wanted every kid to get fed.

“What he's done was amazing, outstanding. Once the fans are back in, Marcus Rashford could be the first Man Utd player to get a standing ovation here at Anfield. He'd definitely deserve it because thousands of families are going to get fed now.”

Asked if he believes politicians are doing enough to support the nation, Robertson added: “For me, no. But everyone can do better. Even though I'm active in charity work, I believe I can do better.”

At the beginning of the Covid-19 outbreak, UK health secretary Matt Hancock called on high-earning Premier League footballers to “do their bit”, a statement that was met with a huge backlash and the government continues to be scrutinised for it's perceived poor handling of the pandemic.

Despite having no obligation to do so, Reds skipper Jordan Henderson joined forces with other team captains in the English top tier to set up a fund that would go towards the National Health Service and Robertson believes Hancock must feel foolish when looking back at his original comments.

“Yes, of course I was annoyed,” the left-back said. “What he said, he'd regret now. Hendo (Jordan Henderson) and all the captains set up that big fund for the NHS and raised millions. We've been attacked but we've shown that we're a profession that gives back to the community.