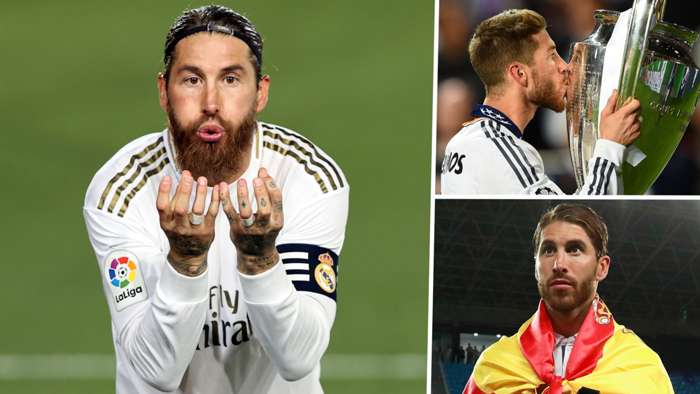 As they celebrated Real Madrid's 10th European Cup triumph, Iker Casillas turned to Sergio Ramos and said, "You're the f*cking boss – and will always be the player who delivered La Decima."

However, it was Ramos who produced the defining moment of the match, with the towering, injury-time header that had forced extra-time in Lisbon.

His goal broke Diego Simeone's side, who had nothing left to give after a monumental campaign in which they hadalready been crowned champions of Spain.

He has arguably won them La Liga too.

With Real primed to claim their first title since 2017 by beating Villarreal at home on Thursday night, Zinedine Zidane has already vindicated his decision to return for a second spell at Santiago Bernabeu.

Karim Benzema, meanwhile, is also belatedly getting the credit he deserves thanks to the most influential season of his 11-year Madrid career.

It is Ramos, though, who has sealed the title, with one decisive contribution after another during the closing stages of a topsy-turvy title race with Barcelona.

The centre-back has scored 10 goals in La Liga this season. Half of them have arrived after the resumption of play following the coronavirus-enforced break.

Two were match-winners. In both instances – first against Getafe, and then at Athletic – there were less than 20 minutes remaining when Real were awarded a penalty.

"Those moments of doubt when taking penalties, that's when I feel most comfortable," he revealed afterwards.

It isnot as if he enjoys being reviled by so many supporters. He wouldn not have made a behind-the-scenes documentary for Amazon Primeotherwise.

As he admitted himself, 'The Heart of Sergio Ramos' was about trying to change the public perception of him.

"A lot of people know me," he explained. "But that's only based on what people see on the outside. That image doesn't always reflect who I am...

"They don't know what's dearest to my heart. Or what I feel inside. This is who I am and how I want people to see me."

Still, while the documentary did a fine job conveying just how much Ramos loves his family, it also highlighted his competitiveness.

In one scene, his mother and father recall how a Ramos broke his brother Rene's nose when the two came up against one another in a friendly when they were kids.

Rene unsurprisingly reacted angrily to the perceived betrayal but Sergio replied:"There are no brothers in football. We are rivals."

That win-at-all-costs mentality has been the over-riding characteristic of Ramos' entire career. The end has always justified the means.

Barcelona defender Gerard Pique claimed that he had never seen Madrid play as badly at the Bernabeu as they had in the first half of their Clasico clash in March.

Ramos said he wouldhave no issue performing at the same level in every derby if it meant always winning the game.

At the end of the day, though, he will savour this success; he may even regard it as one of the most satisfying victories of his entire career.

After all, he very nearly left Madrid just over a year ago.

At the end of a calamitous 2018-19 campaign in which Real failed to win a major trophy, the then-33-year-old Ramos was considering accepting an offer from China.

His relationship with club president Florentino Perez had notcollapsed, but it had been left significantly strained after Madrid's humiliating, Champions League last-16 elimination by Ajax.

Ramos, remember, had got himself suspended for the second leg, which Madrid lost 4-1 as their captain watched on from the stands, surrounded by documentary cameramen.

It was an embarrassing evening all round, but particularly for Ramos.

"The Ajax game created a great deal of tension, that's true," he later admitted. "It was a time for us to reset things."

And that isexactly what they did: Ramos and Perez eventually made up, while Zidane was brought back as coach after the Ajax debacle, replacing Santiago Solari.

Still, as the 2019-20 season began, with Madrid's star summer signing Eden Hazard injuredand Barca buoyed by the addition of Antoine Griezmann, the Catalans looked a good bet to win a third successive title under the now deposed coach Ernesto Valverde.

However, it was Camp Nou which descended into chaos, while a surprising serenity spread overSantiago Bernabeu.

Make no mistake about it: for all Benzema's brilliance, Real's league win has been founded upon their defence.

Ramos has been key in that regard, expertly marshalling a backline that has beenbreached just 22 times.

Indeed, for all the skipper's pivotal penalties, the defining image of his season should actually be his goal-line clearance in Monday's vital 2-1 win at Granada.

It was an intervention that effectively delivered the title.