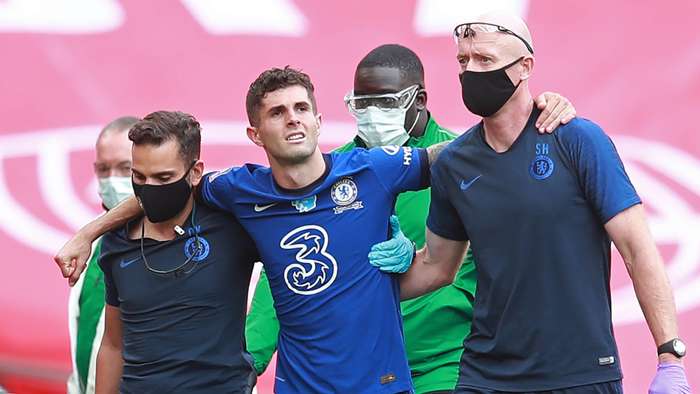 Frank Lampard admitted that Chelsea may have to start the 2020-1 Premier League season without the services of Christian Pulisic, one of several Blues stars stricken with injury.

In his absence, Pierre-Emerick Aubameyang netted his second of the afternoon to give the Gunners victory, although the Blues were already assured of European football next season after finishing fourth in the league.

Pulisic had already been confirmed as a casualty for Chelsea's visit to Bayern Munich on Saturday in the second leg of the sides' last-16 clash, and Lampard believes that he faces a race against time to regain fitness before the Londoners begin the new seasonin mid-September.

"With Pulisic it’s touch and go for the start of the season. We have to treat it right," the Chelsea manager explained to reporters on Friday.

"He has been fantastic although had a couple of these injuries this season. In the big scheme when Pulisic reflects on the first season, I think his improvement levels coming here, when you think of his goals and assists being the best of his career in the first year in the Premier League.

"From where he was at the start and how he was playing in restart he should be very happy because that is down to his work.

"We will get him fit and ready. If he misses the first part of the season, the first one or two games, then we will have a firing Christian hungry for restart."

As well as the United States international, Chelsea are missing a host of big names as they seek to overturn a formidable 3-0 deficit against the Bundesliga champions.

Cesar Azpilicueta and Pedro both joined Pulisic in succumbing to injury during the FA Cup final, while Willian was left out of Chelsea's 23-man travelling squad amid speculation that the Brazilian will soon sign a contract with Arsenal.

The Blues are boosted by the return of N'Golo Kante and Ruben Loftus-Cheek, who Lampard affirmed are both ready to start at the Allianz Arena should they be needed.

"They are fit to start, both. With Pulisic we are looking at around a six week injury, Azpi hopefully three weeks," he added.