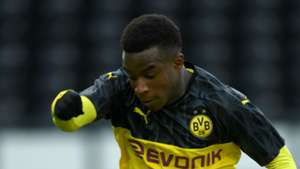 Borussia Dortmund's 15-year-old prodigy Youssoufa Moukoko set a new Under-19 Bundesliga goalscoring record by taking his tally to 34 on Sunday.

In his 20th league appearance of the season, Moukoko scored a quickfire double late on to steer Dortmund's U-19s to a 3-0 victory over Rot-Weiss Oberhausen.

The Germany youth international scored 50 goals in 28 U-17 Bundesliga outings in 2018-19, though BVB were unable to retain their title.

Lucien Favre said last week that Moukoko could be training with Dortmund's first team as soon as March, telling reporters: "We have a plan with him, but I can't say exactly when he'll be with us.

"Maybe in March, but we still have to wait for a few things."

He appears set to overtake Nuri Sahin as the club's youngest player in senior football, with the Turkey international having made his Dortmund debut at 16 years, 11 months and one day in August 2005.

Moukoko has been stunning spectators and opponents alike for years, having made headlines when he was just 12 years old.

At that age, the Cameroon-born starlet became the U-17 Junior Bundesliga West top scorer, netting 16 times in just seven matches.

Then at 14, he made history again when he became the youngest player to find the net in the UEFA Youth League when he struck against Inter U-19s in October last year.

He has started all seven of his side's games in the European competition this season and even netted a hat-trick against Sparta Prague in December.

He has already caught the attention of Germany coach Joachim Low, who said last year: "I've been speaking to [Dortmund U-19 coach] Michael Skibbe for a while. Everyone involved is well advised to wait and let him develop in peace."

While some have suggested that the youngster is older than is being claimed, his father has denied that there is any uncertainty about his age.

"His age is right. Immediately after he was born I registered him at the German consulate in Yaounde," he said. "We have a German birth certificate."