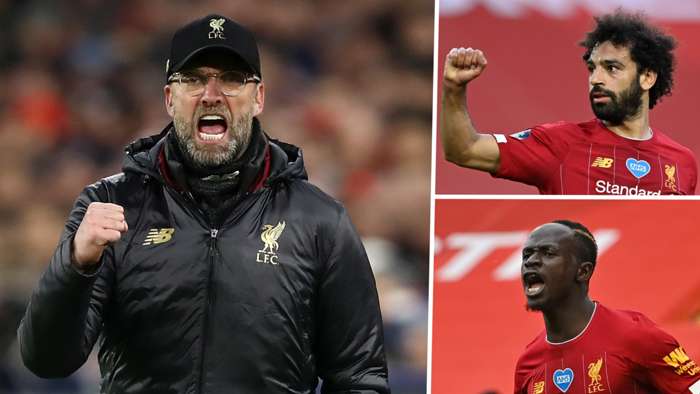 Try telling Jurgen Klopp and his players that Liverpool’s season is done.

Dead rubbers? Not here. Not with this team and this manager.

The Reds head to Arsenal on Wednesday night angry, and with something to prove. They have records in their sights, messages to send.

And, perhaps, momentum to find as well.

It’s tough at the top, eh? Liverpool sit 21 points clear of the chasing pack, having wrapped up the league championship in record time. They have laid waste to the opposition, beaten every other team in the division, and embarrassed the most expensively-assembled club side in English football history in the process.

Their ‘problems’ are the kind most clubswould wish for. Having scaled their Everest, they could be forgiven for easing up on the way back down.

But winners never sleep, they don’t relax and they certainly don’t settle. They clench their fists, enjoy the moment and move on to the next challenge.

There’s always a next challenge.

Klopp laughed when, in the aftermath of the Reds’ first league title in 1990, he read a series of articles asking if Liverpool would be able to retain their crown next season, if they would be able to maintain their standards and prove themselves a truly great team by winning again and again. “It must be an English thing!” Klopp suggested.

He would also, one presumes, have been amused had he skimmed through social media and witnessed the reaction to Saturday’s 1-1 draw with Burnley at Anfield – a game Liverpool could and should have won by a handsome margin. If winners never sleep, then neither do critics.

The Reds were not happy at the final whistle on Saturday. Klopp came onto the field to speak, politely but firmly, to referee David Coote, who also received some more colourful language from Andy Robertson and Trent Alexander-Arnold. Bothfelt – with some justification – that Liverpoolshould have had a late penalty when Robertson wasfouled by Johan Berg Gudmundsson in front of the Kop.

The result ended Liverpool’s hopes of becoming the first-top flight side to win all of their home games in a league season since 1892. “ It feels like welost,” admitted Klopp in his post-match press conference.

Arsenal, then, can expect a reaction. “It will be an interesting one,” Klopp said about the trip to the Emirates. Liverpool’s motivation will be strong.

“Some people outside have said ‘is the desire there?’” said Robertson on Saturday. “But they obviously don’t know these lads or the manager very well.

Liverpool know that they need to win each of their three remaining games if they are to beat Manchester City’s all-time top-flight points record. The Reds can reach 102 points by seeing off Arsenal, Chelsea and Newcastle, ensuring they will forever be remembered alongside Pep Guardiola’s centurions of 2017-18.

These things matter, as does the idea of rediscovering their very best form, underlining their supremacy in a league which is already desperate to tear them down. The price of success is the enemies it creates, and those enemies are ready to attack.

Klopp’s side have certainly not – the home win against Crystal Palace aside – been at their absolute best since football returned last month.

Some would argue, indeed, that their performances had dipped even before the world went into lockdown in March.

In the space of two weeks, pre-Covid-19, Liverpool lost their proud unbeaten league record at Watford and exited both the FA Cup and Champions League. Having won 36 of their first 41 games in all competitions this season, they have won only five of their last 12.

No reason to panic, of course, but enough to sharpen the minds of players who, subconsciously at least, could be forgiven for taking their foot off the gas with the title wrapped up.

“That’s the worst thing we can do,” added Robertson. “If we lose our ruthless streak, then we don’t become champions.”

Klopp would agree. He has spoken repeatedly of the need to keep pushing, keep improving. “We can still improve in many areas,” he said earlier this month. He means it, though as it stands it looks like those improvements will come from training rather than transfers – much to the dismay of many supporters.

Meanwhile, the challengers are circling. City, emboldened by their let-off in the Court of Arbitration for Sport , are already talking bullishly about next season – where presumably they will seek to lose fewer than a quarter of their league matches – while Manchester United’s improvement has optimism flowing around Old Trafford for the first time in a while.

Both, surely, will put up a better fight next term, while it will be interesting to see how the London giants, Chelsea, Arsenal and Tottenham, evolve.

They will enjoy another guard of honour at the Emirates, another chance to remind the world who’s boss, but then it’s back to business.

We should expect nothing less from the champions.