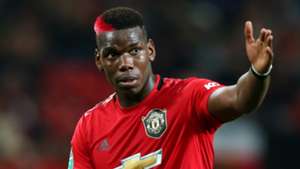 Paul Pogba will likely "abandon" Manchester United and English football this summer in order to make a return to Juventus, says Mohamed Sissoko.

Having already retraced his steps on one occasion - when returning to Old Trafford for a second spell in 2016 - a similar move could take the World Cup winner back to Turin.

A switch to Serie A has been mooted for some time, along with talk of long-standing interest from Real Madrid.

It could be that 2020 is the year in which Pogba finally severs ties with United for good, with questions having been asked of his form, fitness and commitment to the club's cause for some time.

The 26-year-old's agent, Mino Raiola, has admitted that tentative talks have been held regarding a return to Juve.

Sissoko, who spent three years with the Bianconeri prior to Pogba's arrival, believes the France international will push for a transfer away from Old Trafford when the next window opens.

"I think he will return to Juventus," Sissoko, who left the Serie A giants in 2011, told the Daily Mail.

"He will come back due to situations that have arisen.

"Everything suggests that he will abandon Manchester and England and Juventus is a club that knows him and where he is loved and respected unconditionally."

If Pogba were to link up with Juve, then he would form part of a star-studded squad.

Cristiano Ronaldo is very much the leading man in Turin, but the five-time Ballon d'Or has plenty of quality around him in a notable supporting cast.

Another Serie A title could be on the cards for that side this season, while Sissoko believes Maurizio Sarri's team are also capable of competing with reigning European kings Liverpool for the coveted Champions League crown.

He added: "I think Juventus are very well equipped.

"[Jurgen] Klopp told the truth: it's not a single period that defines a club's strength.

"Juventus has unique players. I think the best final can be Liverpool - Juventus. Two unique clubs in mentality, player strength and football history. I was lucky enough to play in both clubs and I was lucky.

"They both have atomic attacks. Liverpool is younger, Juventus has more experience. We speak of very high levels in both Turin and Liverpool."

Juventus and Liverpool have work to do if they are to remain in the hunt for continental success this season, with both having suffered 1-0 away defeats in the first legs of their respective last-16 encounters with Lyon and Atletico Madrid.