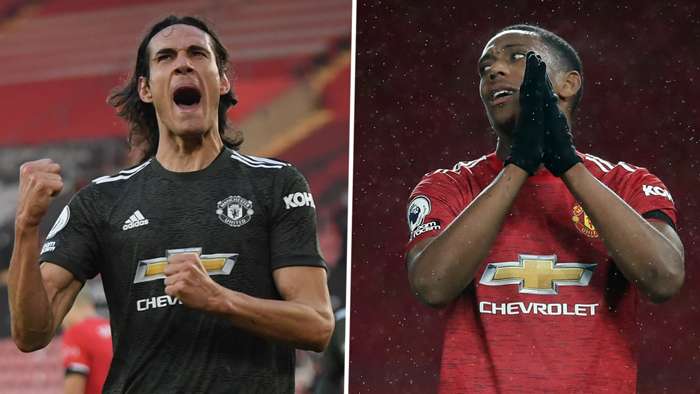 Paul Pogba says Edinson Cavani offers qualities to the Manchester United squad that Anthony Martial, Marcus Rashford and Mason Greenwood do not have.

Questions were asked of the Red Devils’ decision to sign a 33-year-old striker on transfer deadline day, with some accusing Solskjaer of lacking long-term vision.

Cavani hashoweverproved to be a valuable asset at Old Trafford, with younger team-mates taking important lessons from him while five important goals have been contributed to the cause.

His latest effort came in the2-1 victory at Fulhamwith predatory instincts on full display from a man who has now matched the return of regular No 9 Martial.

Pogba, who netted a stunning winner at Craven Cottage, has told MUTV of the importance being placed on Cavani’s presence in Manchester: “Everybody knows that Edi is a top-class striker and there’s few strikers like this in the world, and we had the chance to have one.

“We know the hardest goals are those goals. We have talented players – Anthony Martial, Rashy in front, even Mason, that they can shoot from outside and stuff – but they don’t have this, the experience of Edi, and they don’t have the same quality of Edi as well.

“So I think we complete each other with the players we have in front and Edi can obviously show his class like he did today. Those goals that we needed, at the right time, he’s always there at the right time and the right moment to help the team to win.”

Solskjaer would have known what he was getting when putting a deal for Cavani in place, with the United manager once a prolific frontman himself.

Quizzed on the South American’s most recent strike and whether it was his type of goal, the Red Devils boss said: “What are you saying!? That I just scored the scruffy goals!?

“No, but that’s a centre-forward’s goal. You’ve got to be there to score and that’s what he does, and I think you can see – if you just watch him, if you have a player cam on him – his movement is incredible, fantastic.