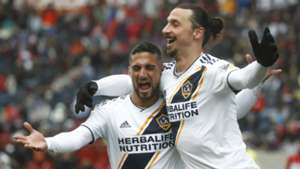 The legendary striker spent two seasons with the MLS side before he left to return to AC Milan in January.

The former Barcelona, Juventus and Manchester United forward scored an incredible 53 goals in 58 games for Galaxy, finishing the club's top scorer and Player of the Year in both seasons.

While the 38-year-old's exploits saw him become a fan-favorite in the United States, it seems his teammates were not so fond of him.

Lletget has spoken out about the difficulty of playing alongside Ibrahimovic, admitting that the team's spirit has improved since his departure at the start of the year.

"There's definitely a better feel around the place for sure," Lletget said on the latest episode of BSI: The Podcast.

"As far as chemistry, that's only going to build with time."

He added: "You couldn't be free. It was super frustrating. You feel like you want to literally take your boots off and just walk off the field.

"It's tough to play against him and tougher to play with him."

During a clash with local rivals LAFC, while the teams were all square at 3-3 and there were only six minutes left to the game, Ibrahimovic and Lletget stood side by side in a wall to defend a free-kick.

Although nothing came of the set piece, it went viral on social media because Ibrahimovic pushed the midfielder out of the wall, much to Lletget's shock.

"I was telling him in that play: 'This [opponent] is alone, should I go?' I'm kind of whispering to him and he said: 'No, stay'. Then literally as he's about to kick it, he just shoves me and you can see in the video that I just play it off super cool. Then obviously I wake up the next day and it goes viral.

"it's one of those moments I think he shows his true colors."