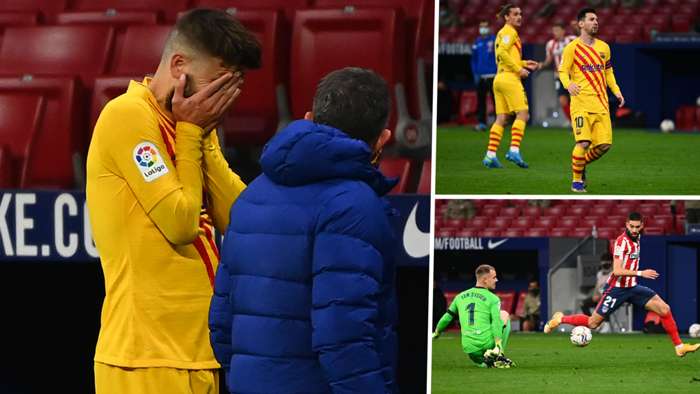 Playing against Atletico Madrid at the Wanda Metropolitano is never easy at the best of times and Barcelona were plunged deeper into despair by what unfolded in the Spanish capital on Saturday night.

However, a horror knee injury to veteran centre-back Gerard Pique has now left the Blaugrana facing a defensive crisis.

Without wishing to speculate too heavily on the extent of the injury, it looked very bad indeed, with Pique leaving the pitch in tears. He turns 34 in February; it may prove to be a long road back.

So too will Barca, as centre-back is not a position in which they are particularly strong. Indeed, they tried to sign Eric Garcia in the summer but they are now so weak financially that they could not meet Manchester City’s far from unreasonable asking price for the 20-year-old.

As a result, they have just three orthodox centre-backs in the senior squad: Pique, Clement Lenglet and Ronald Araujo.

Should Pique be out for months, it leaves just Lenglet and Araujo, although Frenkie de Jong is obviously capable of moving from midfield into defence, as he did against Atletico.

The worry, though, is that Lenglet’s performances have dipped this season, while Araujo is only 21 years old.

Of course, Araujo's age doesn’t preclude him from starting, particularly as his performances to date have been excellent, both composed and confident. However, the sample size is small: just 10 appearances so far for Barcelona.

The loss of Pique for a significant period of time would, thus, be devastating for Barca.

Of course, the man himself will be distraught. And the injury capped what was already a tough evening for him, as he was at fault for the goal that ultimately decided the game.

On the stroke of half time, he was too slack while attempting to control the ball high up the pitch, and it span off his thigh and into Angel Correa’s path.

The Argentine promptly fed Carrasco, who was met 40 yards out by Barcelona goalkeeper Ter Stegen. The winger slotted the ball through the German's legs before stroking into the unguarded net.

It was an atrocious piece of defensive play from Pique and Ter Stegen, which deservedly resulted in the concession of a decisive goal.

It was a miserable night all round for Barca, one which only strengthened the suspicion that captain Lionel Messi doesn’t fit into Ronald Koeman’s Barcelona. However, there's also the sneaking feeling that the six-time Ballon d'Or winner has somehow lost some self-belief.

Messi's inability to get into the games is a major problem for Koeman, given the Dutchman doesn't know how to get Barca out of sticky situations with tactical tweaks.

Indeed, the Catalans haven’t won any game they have been behind in this season. And to make matters worse, Koeman's idea of changing the game is to throw on all of his attack-minded players on, thus completely sacrificing the team’s structure.

Antoine Griezmann’s move from Atletico continues to look like an expensive aberration, for both player and club, with the capital club the only beneficiaries at this stage.

But he's not the only one struggling to step up to the mark. No Barcelona player showed up for the post-game interview on television until 17-year-old Pedri agreed to do it. He spoke for under a minute before disappearing.

Say what you like about Luis Suarez, whom Barca sold to Atleti during the summer, but he used to speak up when nobody else would. This Barcelona are greatly lacking in that kind of accountability.

Atletico, by contrast, look united, strong and capable of challenging for their first title since 2014.