'People say it's s***, but I love Iraq' - Whitecaps defender Adnan fighting to help his homeland 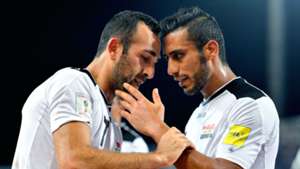 For most professional athletes, the offseason is a time to relax and unwind. It's a time to reflect on the season that just ended and look ahead to the one that lies ahead. For the first time in quite a long time, players are given a much-needed opportunity to rest.

But Vancouver Whitecaps defender Ali Adnan didn't relax or unwind this winter. Instead, the 26-year-old spent his offseason back in Iraq, working alongside protesters while trying to give a better life to those in his home country.

The Iraqi international's offseason trip home wasn't his first. He's been active in his home country throughout his career, which has taken him through Italy with Udinese and Atalanta as well as Turkey with Caykur Rizespor. Soccer is Adnan's passion, but his life goal is to help those in a country that he believes is so often overlooked and miscast.

"Everyone loves this country, but I feel like I'm a different person," Adnan told Goal. "If somebody loves his country 90 percent, I love my country 200 percent. Really, I love my country so much. That's why this means for me a lot. When I see people, they fight for a better life. The people there, they look forward to having a good country, better life, but they don't have it. We have everything in this country. We have people living without a war, we have people without food problems.

"Now is the moment for everyone to support Iraq, because I think Iraq as a country is very important for everyone in the world. I hope to help my country. After I finished my season here, I can have a vacation, but I didn't go to vacation. I prefer to go to Iraq. Everyone told me, 'It's very dangerous.' Also, the team here, the staff, they called me, 'What are you doing there? It's dangerous.' I said, 'No. For me, this is nothing. It's not dangerous, because I've always been with the people and it's never been a problem for me.'

"People from the outside look at Iraq and they think of it as the country they only see on TV. When you look on the TV, they say, 'F*** this s*** country', you know? That's normal, but when you're there, and you're inside, you see the people, how much they love each other, how much they help each other. If you're coming from a different country and you go there, and if you have no food, you have no money, they gonna give you everything you want and they'll let you be there for as long as you want. Everything is nice there. I love to help my country. I hope this year, we can have a better life."

Before his trip to Iraq, Adnan spent 2019 adapting to life in Canada in what was his first season in MLS. He originally joined the Vancouver Whitecaps in March 2019 on loan, and that loan was turned into a permanent move in July.

In total, Adnan started 28 matches in his first season in MLS, although the Whitecaps as a club struggled in a season where the team failed to make the playoffs. For Adnan, it was a season of adjustments, especially when it comes to travel. The Iraqi international, who has 73 caps to his name, says he would sometimes spend 25 to 30 hours travelling back to his home country for national team games. That takes a toll, especially for a player that wasn't fully sure what to expect from this new league.

"When I [first] came here, let's be honest, I didn't feel like MLS was a big enough league for me [since] I was coming from Italy, but after I came here, it was actually a surprise," Adnan said. "Everything was beautiful here. People, stadiums, fans and the teams here actually have a lot of good players, like big teams here have many [good] players. I found it difficult to play here.

"When I was first coming here, I thought this would be an easy league, but I didn't know it was gonna be this hard for me. I actually love this league so much now. I felt like there would be a big difference between here and Europe, but when I came here, it really wasn't that different. The only major difference is the time. It takes more than 10 hours sometimes just to travel. MLS is gonna be one of the best leagues in the world soon."

Throughout his career, the 26-year-old has already made his mark on Iraqi soccer. He became the first Iraqi player to move to Italy's Serie A and is the only Iraqi-born player to ply his trade in MLS. He is joined in MLS by one of his Iraqi teammates, though, in Justin Meram, a first-generation American who represents his parents' homeland on the international stage. And players like Meram are a part of a shift in Iraqi soccer, as the team has welcomed a number of new faces with dual-citizenship in recent years.

The aim? A spot in the 2022 World Cup. Iraq has only been in the competition one time in 1986. As things stand, the Lions of Mesopotamia sit atop their group through five matches with a two-point lead on second-place Bahrain. That is despite FIFA's decision that Iraq couldn't host its most recent qualifiers due to unrest in the country, forcing the matches to be played in Jordan instead.

But Adnan believes a trip to Qatar in 2022 is still possible, and he'll do whatever it takes to make Iraq better in the process, on and off the field.

"If you look at the players, like we have Justin [Meram], who was born here in America," he said. "We have two who were born in Sweden. One in England, too many players who were born outside of our country. But I'm gonna tell you something. That's because they're the best players. We have awesome players.

"When we play for the national team, in the first meeting, we say, if there's any new young player, we say, 'We're playing for the country.' No one here plays for himself. No one plays for something different. If you're like this, you'll be here for two weeks and after that, you're not gonna be here anymore.

"The people they understand very well, when you play for your country, nothing is about yourself. The players there, when they come for the national team, they only have one thing on their mind. We just fight to win the game and to make the country happy. That's it."