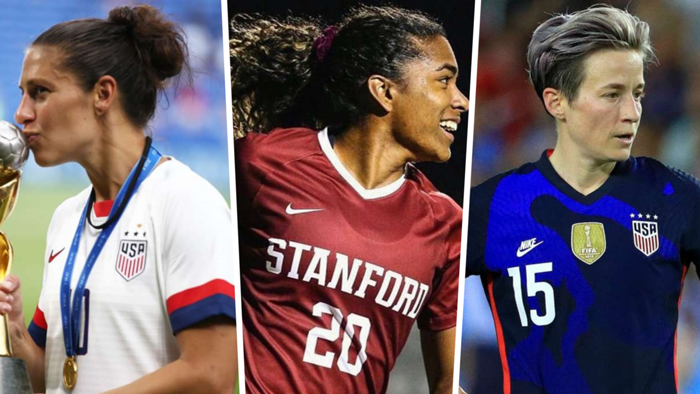 The U.S. women’s national team is set to bring back some old friends, and welcome one new star in the making, for their upcoming pair of friendlies against Colombia.

Catarina Macario, meanwhile, has received clearance from FIFA to begin her USWNT careerafter the Brazil-born attacker was confirmed as a U.S. citizen in October.

Nothing short of greatness is expected from the 21-year-old, who left Stanford University and signed for Lyon last weekafter winning the Hermann Trophy as the best collegiate player in the U.S. in each of the last two years.

It will be up to USWNT coach Vlatko Andonovski to blend the old back in with the new as he begins (what should be) an Olympic year following a pandemic-curtailed 2020.

“They are refreshed, they are physically ready, they’re physically fit, they’ve followed the program from our high-performance coach. We are going to be able to see both of them probably in both games.”

Rapinoe, who opted out of national team duty as well as the NWSL Challenge Cup and Fall Series with OL Reign last year, said the layoff has left her feeling refreshed and raring to go ahead of what might be the Ballon d'Or winner'slast major tournament with the USWNT.

“To be honest, from a very selfish and personal standpoint, there was so much positive that came from this long layoff,” shesaid. “I don’t think I’ve been this rested in my entire career, certainly not since maybe high school.”

The 35-year-old also admitted the whirlwind that was the USWNT’s triumphant 2019 World Cup and the off-field opportunities that followedleft her feeling drained.

“Everything that ensued was just an amazing mayhem but mayhem nonetheless,” Rapinoe said of the period following a World Cup when she won the Golden Boot and Golden Ball. “Trying to balance all the media and appearances and opportunities that I had, it was difficult to be ready for those January 2020 games.

“I was slow to get back into things last year so I actually feel really good physically and just refreshed in a lot of ways, mentally and emotionally.”

After a difficult 2020 that saw her axed from the USWNT’s Olympic qualifying squad and traded twice in NWSL, Pugh also returns to the national team with a point to prove.

“I want the best for Mal and I want her to be the best, so that’s why she’s in this camp,” Andonovski said. “We all know that she has tremendous potential, we all know how good Mal can be. I feel like it’s my personal responsibility to make her be the best version of herself.

“Mal will be given an opportunity. Ultimately it will come down to her whether she's ready or not.”

Pugh, as well as Rapinoe and Lloyd, will return to the national team with a new, imposing competitor for minutes in their midst.

Macario is considered one of the best prospects the USWNT has welcomed in years. Midfielder Lindsey Horan has seen what the 21-year-old can do firsthand in training and is excited to see her unleashed in a game situation.

“I think she’s come out of her shell more in this camp,” Horan said. “You see how incredible she really is, how technically savvy and creative she is, so I think she’s going to be a huge player for us.”

After a long wait for her clearance from FIFA, Macario’s journey with the USWNT will start in earnest on Monday.

“Getting approval from FIFA is another battle she had to fight off the field, but now the real battle starts, because she’s battling for a spot on the best team in the world,” Andonovski said.

“She has great potential and the ability to play in different positions. I would not be surprised to see her both as a 9 and a 10 if we put her on the field.

"We’ve seen that she can adjust quickly from game to game. We’ve seen her being dangerous when she’s closer to the goal in terms of goalscoring ability but also setting up goalscoring opportunities for her teammates.”