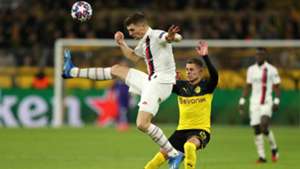 Paris Saint-Germain will be desperate to avoid another disappointing Champions League exit when they take on Borussia Dortmund at the Parc des Princes on Wednesday.

Les Parisiens are on the verge of a fourth consecutive last-16 defeat after going down 2-1 in the away leg in Germany, and must overturn that behind closed doors due to coronavirus fears.

However, having lost just three of their last 54 home matches in European competition, they are 3/4 (1.75) favourites with bet365 to potentially get back into the tie by coming out on top here.

Lucien Favre's men have only won three of their previous 13 Champions League fixtures on the road, but are priced at 31/10 (4.10) to pull off a big victory in the French capital.

Two of the three previous encounters between this pair have resulted in draws, and you can get odds of 16/5 (4.20) on them cancelling each other out once again.

Kylian Mbappe will be assessed after missing training due to illness, while Thiago Silva and Colin Dagba are both injury doubts and Marco Verratti and Thoms Meunier both suspended.

Marco Reus and Thomas Delaney are the only absentees for the guests, both ruled out due to long term injury.

This tie promised plenty of goalmouth action before a ball was kicked, with Thomas Tuchel's men scoring more goals than anyone but Bayern Munich in the group stages and Dortmund having added teenage sensation Erling Haaland to their already exhilarating attack this winter.

The first leg has only set things up even more enticingly for the neutrals, as the prolific French champions are forced to chase a deficit against one of the continent's most exciting attacking units.

PSG vs Dortmund Tips and Predictions