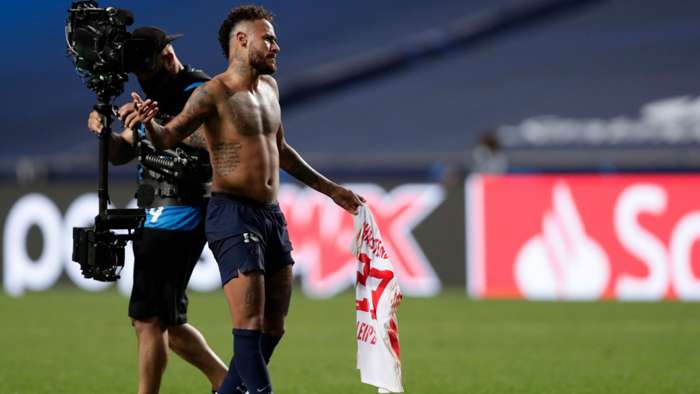 Paris Saint-Germain fans fear Neymar could miss the Champions League final after he swapped shirts with an opponent after Tuesday night’s victory against RB Leipzig.

While this is a common tradition in football, UEFA currently advise against it as part of their attempts to guard against the spread of coronavirus.

The 31-page document outlines extensive health and safety measures including regular testing, dedicated zones for players, staff and media within the stadiums and the wearing of face masks.

Also included in the protocols was advice on shirt-swapping, which stated that “players are recommended to refrain from swapping their shirts”.

The document does not explicitly state what the punishment would for shirt-swapping, though it does say that “non-compliance with the obligations set out in the UEFA Protocol may lead to disciplinary measures in accordance with the UEFA Disciplinary Regulations.”

PSG supporters fear those disciplinary measures could include aban, which would rule Neymar out of Sunday’s showpiece final against either Bayern Munich or Lyon.

The 28-year-old may also be forced to self-isolate for 14 days to guard against the risk of possible infection, which again would see him sit out Sunday’s game.

That has understandably got fans of the French champions concerned, as they contemplate the prospect of their side being without their talismanic forward for one of the biggest matches in the club’s history.

Prior to his shirt-swapping transgression, Neymar was inspirational asPSG breezed past Leipzig 3-0.​The former Barcelona forward’s clever flick teed up Angel Di Maria to score PSG’s second goal, after defender Marquinhos had headed Thomas Tuchel’s side into an early lead.

Neymar also twice hit the post as the Ligue 1 side dominated their Bundesliga opponents, before Juan Bernat sealed the victory early in the second half.