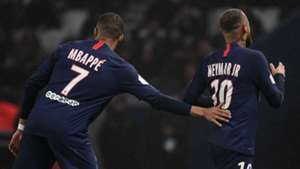 Thomas Tuchel praised hat-trick hero Kylian Mbappe for his response after finding it "difficult" against Borussia Dortmund, with the forward's partnership alongside Neymar crucial to Paris Saint-Germain.

With PSG lining up in an unfamiliar 4-3-3 formation, Mbappe struggled to make an impact during the first leg of the last-16 Champions League tie away in Dortmund last month.

However, since the 2-1 defeat in Europe, France international Mbappe has flourished in domestic action, scoring six goals in three games.

Mbappe's hat-trick on Wednesday helped PSG progress to the Coupe de France final in style, with head coach Tuchel delighted at the 21-year-old's display in the 5-1 thrashing of Lyon.

"Mbappe's been very strong these last few weeks. He had a tough time in Dortmund playing in a different position. It was clearly difficult for him against Dortmund," Tuchel told the media.

"With Neymar, they're very strong together. After Dortmund, Mbappe showed a great reaction after every training session and during the games against Dijon and Lyon.

Neymar also scored in the rout, converting a second-half penalty after Marcal was deemed to have handled the ball inside the area midweek.

Tuchel pointed to Neymar as the catalyst for the team to produce such "extraordinary performances", the Brazilian benefiting from playing regularly after returning from a rib issue.

"Neymar was very strong, he's still dangerous. For him, the most important thing is that he plays," the former Dortmund boss said.

"He's a player who helps us to do extraordinary performances, with extraordinary results. He has to play, and it's good that he played 90 minutes.

"It is also good to have another game to play before Dortmund against Strasbourg. He needs that, he has the ability to play a lot, and when he plays a lot, he is super strong."

Neymar scored PSG's goal against Dortmund but criticised the way the club managed his injury following the defeat, insisting he had wanted to play prior to the trip to Germany.