PSG, Simeone and the winners and losers of the Champions League quarter-final draw

PSG, Simeone and the winners and losers of the Champions League quarter-final draw 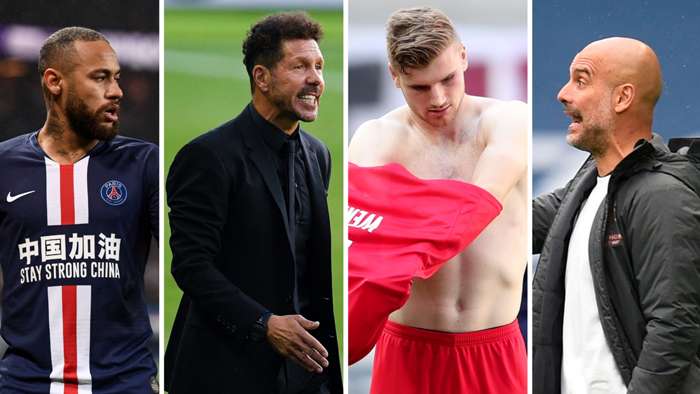 There is still a lot to sort out before the Champions League quarter-finals get underway in Lisbon next month. After play was halted due to the coronavirus pandemic, it left a number of fixtures unfulfilled.

Far unlikelier is the chance of Chelsea turning around their second-round clash against Bayern in Bavaria. And Lionel Messi's Barcelona will be hopeful of eliminating Napoli before storming into the last eight.

Once those fixtures are settled, the much-changed Champions League will go ahead. Straight knockout football with no second legs, it promises to be a breathless and exciting tournament whatever the outcome.

On one side of the draw is the bulk of Europe's heavyweights in Juventus, Barcelona, Real Madrid, Bayern and Manchester City. On the other stand Atalanta, Paris Saint-Germain, RB Leipzig and Diego Simeone's Atletico Madrid.

Three of those teams have never been to the Champions League final and Atletico, despite two recent appearances there, have never won the big one. Having put defending champions Liverpool out, they will be optimistic of going one step further this year.

Here then are the winners and losers of the Champions League draw.

PSG have been handed the draw that everyone wanted, Italian outsiders Atalanta, who are seen as perhaps the weakest team guaranteed a place in the quarter-finals.

Champions League success has been an obsession for the French club and the end-of-season tournament could be their best opportunity in recent years to finally win it.

While many of their rivals have been back in action, and picking up injuries in a hectic schedule, PSG have been resting and weredeclared Ligue 1 champions early in the Covid-19 outbreak.

The focus can now be on building up towards Portugal with a number of friendlies followed by cup finals against Saint-Etienne and Lyon at the end of July, which should see them fully prepared for the start of the competition.

Atalanta, third in Serie A, are still dangerous having coming through a group with Manchester City and Shakhtar Donetsk before knocking out Valencia. But it’s the opposition that Thomas Tuchel would probably have hand-picked.

Three finals - two with Simeone in charge - but no victories is a sad record for the Spanish club. But a kind quarter-final draw against RB Leipzig and suddenly anything will feel possible for Atletico.

Simeone’s side were heading out of the competition in March to reigning champions Liverpool before a remarkable extra-time turnaround at Anfield saw them winning both legs.

That sort of never-say-die performance and a winnable tie could give them the confidence to believe that their luck has finally changed.

Their La Liga challenge has faded but Champions League footballfor next season is virtually guaranteed meaning they can throw their focus on Portugal.

Simeone won’t be able to pump up his fans to spur his side onto victory as he often does at the Wanda Metropolitano, but he will have his stubborn defence as effectively organised as ever and will view this as a huge opportunity to make it third time lucky as a manager.

Five months ago, few people would have given Zinedine Zidane’s side much of a chance of reaching the quarter-finals but the fact that the second leg will be behind closed doors has boosted their prospects of a 14th Champions League success.

In February, Madrid were deservedly beaten 2-1 by Manchester City and Zidane’s incredible record of winning the Champions League as a manager - three times from three attempts - looked like it was finally going to have its first failure.

But since the restart of football, Madrid have regained their confidence, moved clear at the top of La Liga and seen key players including Eden Hazard come back from injury.

Should they secure their first domestic title in three years, Madrid will head to Manchester rejuvenated and able to throw everything at overturning their home defeat.

Inspirational captain Sergio Ramos will be missing through suspension but few would bet against a clubthat even Pep Guardiola describes as the “kings of the tournament”.

The Manchester City manager will find out on Monday whether this will be his last opportunity to win the Champions League with his current club and, if it is, the draw has not made his task any easier.

First his side must get past Real Madrid in their delayed second leg and will then face Juventus if the Italian champions can win their own reverse game against Lyon.

And it won’t get any easier as the tournament progresses with the likelihood of former clubs Bayern Munich or Barcelona waiting in the semi-finals.

City will find out the decision of their Court of Arbitration of Sport appeal next week after they were handed a two-year ban for breaching Financial Fair Play regulations. Guardiola has just a year left at the Etihad Stadium so, should the appeal fail, this would be his final chance to deliver the trophy to the club for the first time.

Many insist his legacy will depend on whether he can deliver a first-ever Champions League success to the Premier League club as well as winning it without Lionel Messi. His task doesn’t seem to have got any easier.

The RB Leipzig striker has already stated that he will not play in the latter stages of the competition but he may be having second thoughts after the draw potentially opened up for the German club.

Opponents Atletico Madrid will not be easy nor wouldPSG in a potential semi-final, but Julian Nagelsmann’s side have avoided the bigger beasts of Bayern Munich, Barcelona, Juventus, Real Madrid and Manchester City.

Werner, however, will not be involved and will instead complete his switch to Chelsea. His loss will also be Leipzig’s.

The 24-year-old is comfortably the club’s top scorer with 34 goals in all competitions as well as contributing 13 assists. The onus will fall on Czech striker Patrick Schick but his figures are a long way behind.

Schick, on loan from Roma, has just 10 goals this season - none in the Champions League - and just three assists.

Leipzig will not be among the favourites in Portugal but wins away to last year’s finalists Tottenham in the last 16, andBenfica and Zenit St Petersburg in the group stage, show how dangerous they can be.