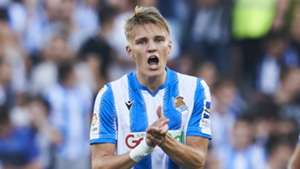 Martin Odegaard insists he is very happy at Real Sociedad and wants to stay for the duration of his two-year loan spell, rather than return to Real Madrid.

The Norway international has been in fine form this season and there have been reports Madrid will try to take the midfielder back to the Santiago Bernabeu in the summer.

Odegaard recently helped to knock his parent club out of the Copa del Rey and he has only made two first-team appearances for Madrid since signing for the club five years ago.

He is currently taking in his third loan spell away from the Spanish capital and is focused on trying to play Champions League football with Sociedad.

"When people ask if I will be here to play in the Champions League, I always say that I'm very happy here and that the plan is to play for La Real for two years," the 21-year-old told El Diairo Vasco .

Sociedad have had a successful domestic campaign so far this season, currently sitting sixth in the table with a game in hand on the five teams above them, but Odegaard knows how hard the fight for European football will be.

"Playing against the best teams in the world is something that is great for a player and it's a dream for me," he added.

"However, there are some very good teams in the fight, like Getafe, Atletico Madrid, Sevilla and Valencia."

Odegaard has supplied seven goals and eight assists for Sociedad this season and he is hoping to contribute to ending the club's 33-year trophy drought.

He continued: "Two things make me very excited, as we want to win the Copa del Rey and qualify for the Champions League.

"I spend every day looking at the photo in Zubieta in which you can see the cup which was won in Zaragoza. I learned very quickly of the importance of this picture and now I look at it with envy.

"It's been a long time for the fans and it's normal for them to be excited, we are too."

Sociedad have built a strong squad this season, with players such as Adnan Januzaj and Nacho Monreal adding both quality and depth to their ranks, and Odegaard thinks this is a reason for their success.

He said: "We have very good players and a deep squad, in which changes can be made without noticing them."