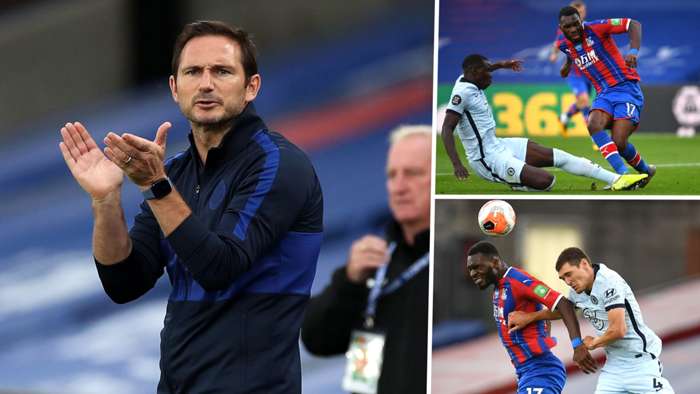 From Chelsea's perspective, there were plenty of highlights in Tuesday night's 3-2 win at Crystal Palace.

Going forward, there was Willian making two assists in the same game since December 2017, Olivier Giroud scoring his fifth goal in eight Premier League outings and Tammy Abraham netting for the first time since January.

At the back, meanwhile, Kepa made a stunning finger-tip save from Joel Ward's late header just seconds before Kurt Zouma came up with an equally important sliding challenge on Christian Benteke to deny the hosts an injury-time equaliser.

Chelsea boss Frank Lampard admitted in his post-match press conference, "In those last moments, it was nerve-wracking for us."

It shouldn't have been, though. And Lampard is fully aware of it. Despite leading by two goals on two separate occasions, Chelsea were lucky to escape from Selhurst Park with a draw.

"When you go 3-1 up, if you can navigate the next five minutes, the game should be more comfortable for you.

"But, straight away, we switch off and make two or three mistakes in the build-up to a goal. Not good enough."

It was a blunt but fair appraisal of Chelsea's defence on the night, but also arguably of their overall campaign.

Indeed, it is worth noting that while victory propelled the Blues into third place in the Premier League, no other side in the top 10 has conceded as many goals (46). Even Palace, Brighton and Newcastle from the bottom half have shipped fewer.

Of course, Chelsea don't just have issues to address at the back. While Willian, Giroud and Christian Pulisic once again excelled in attack at Selhurst Park, Lampard was less satisfied with his midfielders.

"I wasn’t overly delighted with them," he confessed. "I think considering how slickly we have moved the ball in recent games, I thought we held onto it a bit long."

However, Lampard at least has plenty of options in midfield and could have even more next season, with the club interested in signing West Ham's versatile England international Declan Rice.

When one considers that Chelsea have already snapped up Timo Werner and Hakim Ziyech, and are also leading the race for Kai Havertz's signature, the Blues could soon have a front six to rival any side in the league.

There are huge questionmarks over the defence, though.

Prior to the resumption of play in the Premier League after the coronavirus-enforced break, Chelsea were only targeting one major defensive addition: Leicester City left-back Ben Chilwell.

However, the Blues backline has looked increasingly vulnerable since the restart. Essentially, as soon as the midfield loses control of the game, as they did at Palace and West Ham the week before, the team lookwide open in defence, particularly when N'Golo Kante is missing.

Certain players, then, need to prove that they're up to the task in the remaining four games of the season, particularly with Chelsea locked in a tight battle for a top-four finish with Leicester and Manchester United.

For example, Reece James marked Wilfried Zaha out of Chelsea's home game against Palace back in October. However, the full-back was a weak link at Selhurst Park, with his cavalier attacking runs forward leaving his side exposed in defence. Time and time again, James was bailed out by Willian's excellent covering.

However, when James was caught out again in the closing stages, Patrick van Aanholt got in behind on the left-hand side to tee up Benteke for the goal that set up such a nerve-racking finish for the visitors.

One could argue that you know you have problems when Benteke scores against as you, as this was the forward's first strike in the Premier League since April 2018.

However, he was good value for his goal on the night, as he used his physique wonderfully well to dominate Andreas Christensen and bring Zaha, Andros Townsend and Jordan Ayew into play.

Christensen is undoubtedly one of those now playing for his future under Lampard.

Indeed, for all his talent on the ball, and the clever way in which he reads the game, the Dane has long had to deal with doubts over whether he is really strong enough for English football.

Chelsea are one of the worst sides in the Premier League at defending corners and Christensen is particularly culpable in that area, so it's no surprise that a player once regarded as the gem of the academy at Cobham Training Centre has yet to start talking with the club over extending a contract that expires in two years.

Elsewhere, Antonio Rudiger is set for a new deal but even he was dropped after his sub-standard showing against West Ham, while the fact that the right-footed Cesar Azpilicueta is currently being deployed as a left-back is indicative of Lampard's lack of faith from a defensive perspective in Emerson Palmieri and Marcos Alonso.

It was Zouma who benefited from Germany international Rudiger's demotion and he is clearly desperately trying to prove his worth to a manager eagerly revamping his squad after being prevented from strengthening last summer by Chelsea's transfer ban.

Zouma's last-gasp heroics against Palace certainly made an impression on Lampard.

"It was a fantastic challenge from Kurt," the Blues boss enthused. "Defenders might not always get the credit they deserve for those moments but it was definitely a goal-saving tackle. It saved two points, so I am really pleased with him.

"I think he played a really great game against Watford (on Saturday) as well. He's been imposing in his defending and good on the ball; that’s everything I want."

It's a clear message to Zouma and the rest of Chelsea's defenders. Inconsistency will no longer be tolerated. Patchy performances are no longer good enough.

Standards have been raised and anyone who fails to meet them can no longer feel secure at Stamford Bridge.