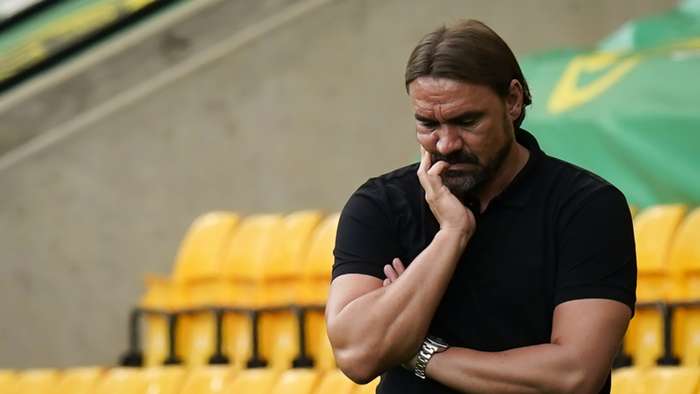 Norwich have been relegated from the Premier League after suffering their 24th defeat of the season, losing 4-0at home to West Ham on Saturday afternoon.

Prior to the match, Farke admitted that his team were destined for the drop, telling reporters:"Even if we win the last four games, I would say with at least a 99 per cent guarantee it would not be enough to stay in this league."

The German manager's prediction proved correct, as Norwichgot off to the worst possible start when Michail Antonio turned the ball into the net for the visitors following a Jarrod Bowen corner with just 11 minutes on the clock.

The home sidedidn't allow their heads to drop after the opener as the game turned into a real end-to-end contest, but top scorer Teemu Pukki squandered their best chance when he headed a pinpoint Jamal Lewis cross wide of the post.

Farke then watched his side concede from another set-piece right on half-time, as Antonio latched onto Mark Noble's expert delivery to divert a header past Tim Krul and into the far corner of the net.

Antonio completed his hat-trick early in the second half before adding a fourthto round off a comfortable 4-0 victory for West Ham, who have nowmovedsix points clear of the relegation places.

Norwich's relegationwas confirmed at the final whistle, as they remain rock bottomof the table on 21 points with only threematches remaining.

Norwich can no longer mathematically make up the ten-point gap on17th placed Watford, as they missed the chance to gain some ground on their rivals following the Hornets' 1-1 draw with Newcastleat Vicarage Road.

Farke's men have only won a total of five games all season, conceding 63 goals while only managing to score a measly 23 at the other end of the pitch.

Pukki's prolific form in the first half of the campaign looked set to inspire the Canaries to safety, but results began to take a turn for the worsewhen the Finland international stopped finding the back of the net.

Norwich have lost all six of their games since the resumption of the season on June 17, and they still have trips to Chelsea and Manchester United to come.

A home clash against Burnley is wedged in between on July 18, which will be the Championship-bound outfit's last chance to restore some pride before they return to English football's second tier.