No rest for Manchester City ahead of Champions League showdown with Real Madrid, insists Guardiola

No rest for Manchester City ahead of Champions League showdown with Real Madrid, insists Guardiola 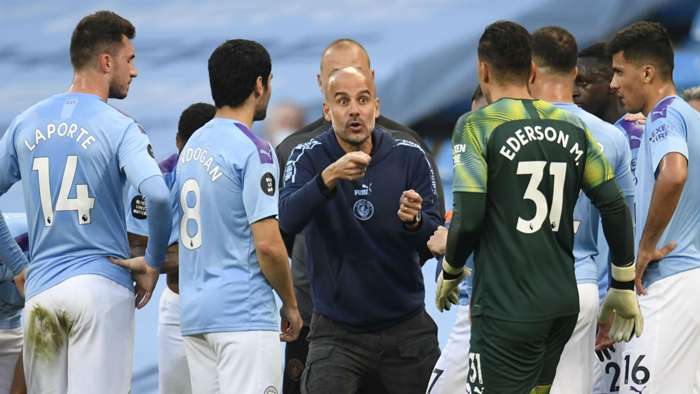 Pep Guardiola will not give Manchester City any time off between the end of the Premier League season and their crunch Champions League clashwith Real Madrid.

Guardiola was critical of his players' performance over the opening 45 minutes of that match and they are set for a period of intensive work on the Etihad Campus training pitches in the 12 days in between the concluding Premier League encounter against Norwich City on July 26, and Madrid's visit to Manchester on August 7.

City hold a 2-1 advantage from the first leg at the Santiago Bernabeu back in February and, ahead of Tuesday's Premier League game atWatford, Guardiola rejected the suggestion he might allow a break at the end of the domestic season.

It is a stanceat odds with Los Blancos boss Zinedine Zidane, who said he would allow the newly crowned La Liga champions to "disconnect a little bit from football" after finishing their domestic campaign with a 2-2 draw against Leganes on Sunday.

"No, no, no – we'll have two days after the game against Watford but after we will make two weeks of training sessions," Guardiola said, with his team guaranteed a second-place finish behind Liverpool.

Guardiola's criticism of City's mentality against Arsenal marked a departure from his usual reactions to defeats, where he tends to be carefully protective of the players.

The 49-year-old is set to break new ground next season, having never led a club for five consecutive campaigns.

Despite the dispiriting nature of the weekend loss and the surrender of the Premier League title to Liverpool, Guardiola insists his motivation remains undimmed.

"As a manager with one team, you have an advantage with positive things but at the same time, after you win a lot, you have difficulties to handle the situations," he said. "But I'm so excited for these two weeks we have ahead, preparing for the Madrid game and excited for next season.

"The moment I lose this excitement, the fire I still have inside me to go after victories and defeats, it will be a problem."

Guardiola added: "It's a challenge for me, I've never been five years at one club and also it is a challenge to prove myself next season. Am I able to maintain the level that we had in the previous seasons?

"In a world where everyone sacks everyone, to stay in a job for a long time is so difficult. Just take a look. England was an exception but now it is not anymore.