Nigerian footballer Martins dies after collapsing on the field 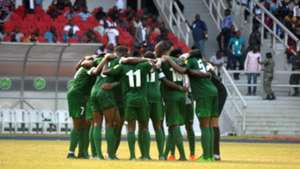 Nasarawa United's Chieme Martins passed away after collapsing on the field during Sunday's Nigeria Professional League clash against Katsina United.

The ambulance was stationed at the stadium reportedly failed to start after Martins was rushed off the pitch, causing a delay in seeking medical treatment for the player.

It is understood he was later taken to hospital in a press vehicle, but medics failed to revive him and he was pronounced dead shortly after arrival.

News of his passing filtered back through to the game, which finished 3-0 in Nasarawa's favour, leaving his team-mates inconsolable as they learned of their tragic loss.

Chairman of the League Management Company, Shehu Dikko anticipates an autopsy to establish the cause of the player's death.

"We commiserate with Nasarawa United and the immediate family of the late player," said Dikko in a statement.

"It is hoped that the findings of the autopsy would inform subsequent measures, if any, that has not been addressed by the existing standard procedure."

Sadly, Martins is not the only footballer to have suffered a tragic end while playing.

Ex-Lyon and West Ham midfielder Marc Vivien Foe collapsed in the middle of Cameroon's 2003 Confederations Cup semi-final against Colombia, with coroners discovering that he suffered from a rare heart condition that increases the risk of sudden death during strenuous physical activity.

Sevilla star Antonio Puerta suffered cardiac arrest during his side's 2007-8 Liga opener against Getafe and carried on playing before collapsing again in the dressing room; he passed away three days later in hospital having been diagnosed with a similar heart condition to that carried by Foe.

Ex-Scotland international Phil O'Donnell, a fellow unwitting sufferer of the condition, passed away just months after Puerta in almost identical circumstances at the age of 35 while playing for Motherwell.

While the FA and other national associations do screen for such defects, detecting the condition is extremely difficult as it tends to show few if any symptoms, particularly in young, physically fit athletes.

Some doctors believe screening to be ineffective and a waste of time, while others defend it as a necessary precaution even if the majority of cases cannot be predicted.