Cavani explains how he became a 400-goal striker that stands to ben...

Edinson Cavani has explained how he became a fearsome striker with over 400 goals to his name and one that Manchester United bought into when he hit the free agent pool in 2020.... 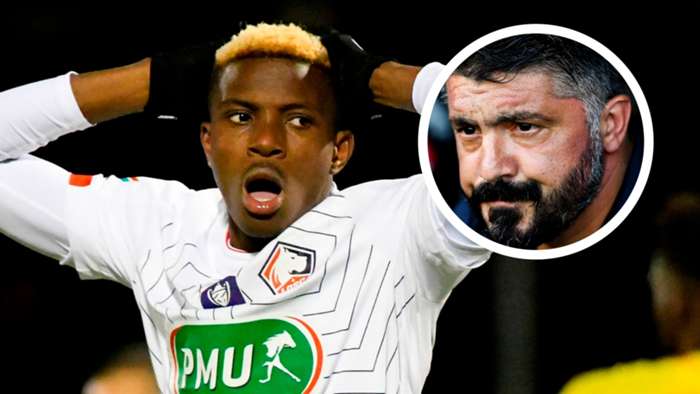 Victor Osimhen's journey from Lagos to Naples hasn't been an easy one.

He hasnever hidden his desire to one day "play for a big club in England", not least due to his dream of following in the footsteps of Chelsea legend Didier Drogba, who became a superstar after swapping Ligue 1 for the Premier League.

Indeed, when Lille played at Stamford Bridge last December, Osimhen called all of his friends on a video chat beforehand to show them that he was walking on the same "grass where my idol scored so many goals".

However, it is worth remembering that Osimhen turned down the chance to join Arsenal after firing Nigeria to victory at the 2015 Under-17 World Cup with 10 goals in seven games in Chile.

"I spoke with Arsene Wenger after the tournament ended," he later told the Independent. "I had a lot of options: Barcelona, Inter, Atletico Madrid, Juventus and the rest.

"Arsenal was a good option but it wasn't the best at the time. I wanted to start playing as soon as I turned 18."

Regular game time was, and remains, of the utmost importance to Osimhen, who flourished at Charleroi and Lille, after struggling to break through at Wolfsburg.

Choosing Napoli, then, makes sense, given Arkadiusz Milik is set to leave the San Paolo during the summer transfer window.

The Pole is the only orthodox centre-forward presently on the Partenopei's books, so Osimhen would essentially be taking Milik's place in a team that has improved rapidly since Gennaro Gattuso succeeded Carlo Ancelotti as coach last December.

The 21-year-old had other concerns about joining Napoli, though. He spoke to Senegal defender Kalidou Koulibaly about Italy's issues with racism, which were exposed again this season by high-profile incidents involving Romelu Lukaku and Mario Balotelli.

However, as Koulibaly told Osimhen, Naples may be a city beset by many problems, but the vast majority of its inhabits abhor prejudice, primarily because they have had to deal with it for years. Territorial rivalryis a major problem in Italy, where the north has long treated the poorer south with contempt and disdain.

Atalanta's team manager, Mirco Moioli, recently referred to a Neapolitan who had been goading coach Gian Piero Gasperini as a "terrone" – an infamous derogatory term for people from the south.

As Koulibaly told the Gazzetta dello Sport, "I too felt the bitterness of the racist insult, but never in Naples. I told Victor that he won't have any problems in Naples. If he comes, he will have chosen the right city."

Osimhen and Naples certainly look like a good fit.

It is a city that has long suffered from severe socio-economic problems, but its people are warm, witty and renowned for their resilience and defiance. Osimhen should feel right at home among them.

He knows what it is to suffer. He was raised in abject poverty in Lagos.

His mother died when he was still a kid – he doesn't even remember the year – and his father lost his job just three months later. He sold bottled water in the middle of traffic to try to help his family make ends meet.

"Where I grew up, people live on the other side of an open dump," he told France Football. "With my friends, we went there every Friday or Sunday to find football boots and shoes. We stayed there for a long time.

"It was funny! We saw it as a game but when you think about it... itwas always a fight.

"Part of my life has been a struggle to survive. But that's all I am today in the end. It's hard to process it all but each event has created my personality."

Neapolitans should immediately take to that personality. They will see themselves in a young man that Manchester United striker Odion Ighalo adores.

"I love him," the ex-Nigeria international told Elegbete TV. "He's down to earth, he’s hard working and he has the mentality of a winner. That’s what I love about him the most: He has that lion’s heart."

The ideal centre-forward, then, for Gattuso, a player-turned-coach renowned for his ferocity and hunger.

Neapolitans will undoubtedly embrace him for the very same reasons. He will require time to settle, of course, to adjust to his new surroundings; to deal with the pressure that comes with playing in such a demanding environment having been signed for such a colossal fee – particularly in the current economic climate.

Osimhen is hardly the finished article, of course, but his potential is enormous.

As well as being blessed with searing pace – Kylian Mbappe was the only other Ligue 1 player to have reached a maximum speed of at least 35km/h in six games or more last season – he is also a clever, versatile forward, capable of both leading the line or playing in a front two.

Consistency is obviously still an issue for one so young and he needs to work on his heading and his shooting, but it is worth noting that his big chance conversion rate (44 per cent) was better than those of Mbappe (39%) and Neymar (35%) in 2019-20.

He lacks Milik's predatory instincts and those Napoli fans anticipating the arrival of the new Drogba may also be disappointed. Osimhen is not yet as physically imposing. If anything, he is more similar in style to Pierre-Emerick Aubameyang and should, therefore, add an extra dimension to Napoli's attack next season.

The Uruguayan, of course, achieved hero status during his time at Napoli. If Osimhen proves anything like as prolific, he will, as Lille president Gerard Lopez says, become a San Paolo "superstar".

Manchester United are planning on sanctioning a loan switch for Facundo Pelli... 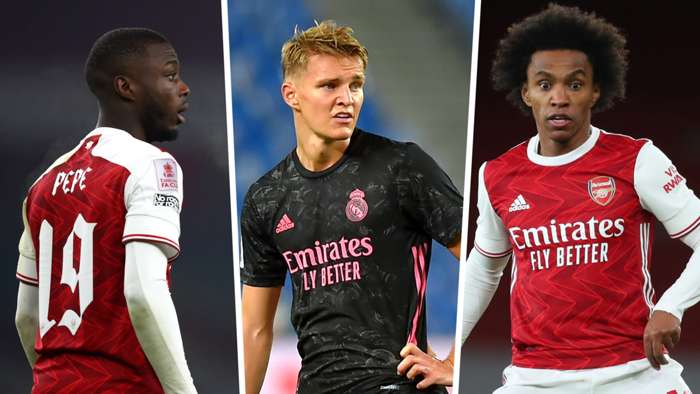 There will be no FA Cup to salvage Arsenal’s season this time around.Arteta s...
More