Next season and 100 per cent Anfield record are not the focus for Liverpool, says Klopp

Next season and 100 per cent Anfield record are not the focus for Liverpool, says Klopp 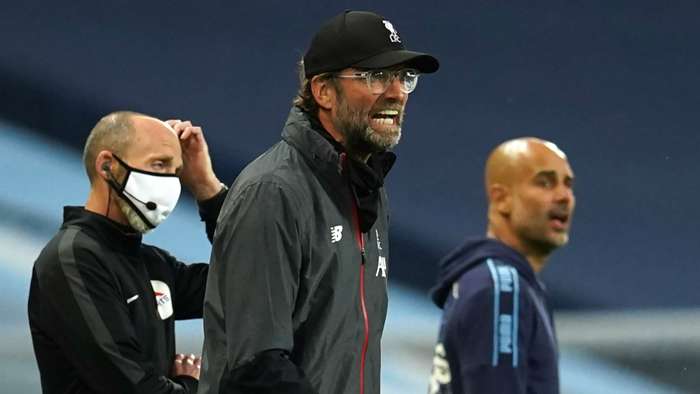 Jurgen Klopp rejected any talk of focus being shifted to next season as Premier League champions Liverpool look to bounce back from defeat at Manchester City when they face Aston Villa.

The Reds welcome Villa to Anfield on Sunday, having succumbed to a 4-0 thrashing at the hands of City in their first game since dethroning Pep Guardiola's men.

Afterwards, Sterling said that "next season started today" for City, who can still complete a treble by adding the FA Cup and Champions League to their EFL Cup triumph.

Klopp dismissed those comments, however, insisting both Liverpool and City are firmly focused on this campaign, even though his side have no more trophies to play for.

"The desire and the greed that we saw last night, that's why we are where we are. We will not stop being like this but we have to be 100 per cent concentrated in all moments of the game and especially against City because they use all little moments of the game.

"That's why I do not think about the next six games, only about Aston Villa. I cannot do it differently, I have not a big plan but we will have a plan for Aston Villa."

Victories against Villa, Burnley and Chelsea will see Liverpool go the entire league season without dropping a point at Anfield.

Asked about that possibility, Klopp said: "We never thought about it, how long the run is or whatever. We have to respect Aston Villa and respect their situation. We know their situation.

"Aston Villa has a lot of quality, they do well defending in a compact formation. That's what I'm thinking about, not the records we can break. We have to break the formation of Aston Villa, that's what we are concerned about.

"This season is a very special season, special for us in a positive way and special from a challenging point of view, not only that we had a three-month break in the middle of the season, as well we play now in the last three weeks six games.

"That's really demanding for all of us. We have to really dig in in this situation, that's what I like from the game last night as well. The attitude was brilliant, we were really fighting, the desire was there. We were in four moments not focused. We have to make sure we don't have moments like this on Sunday."