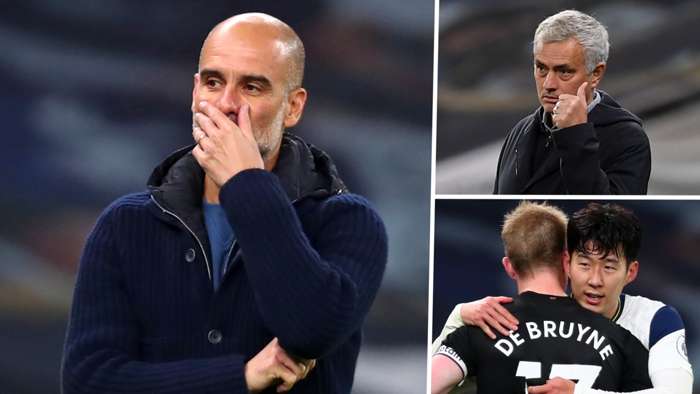 The news that Manchester City fans have long been craving arrived this week when it was announced that manager Pep Guardiola had signed a two-year contract extension, prompting an understandable outpouring of positivity.

As Saturday's 2-0 loss at Tottenham hammered home, the harsh reality remains that Guardiola has a lot of work to do if he is to get his current City side back playing like the one that swept all before them in winning back-to-back titles in record-breaking fashion.

There was even an air of inevitability about their setback in north London. It just felt so fitting that it was Mourinho that immediately reminded everyone of City's flaws a with a textbook demonstration of how to withstand their constant pressure before ruthlessly catching them out on the break.

Guardiola and Mourinho have been trading blows for years now during their respective spells in charge of a variety of European heavyweights.

However, there had been nothing but one-sided fights in England. During Mourinho's time in charge of Manchester United, he even claimed that finishing second to Pep's all-conquering City side was one of his greatest managerial achievements.

On the one-year anniversary of his appointment as Tottenham boss, though, Mourinho proved that not only are his team potential title challengers, but also that City have a plethora of problems.

Spurs are now top of the Premier League table, for 24 hours at least, and eight points clear of City, who have just one game in hand.

Mourinho has rediscovered his mojo back in London and clearly has plenty left to offer as a master tactician.

City had two thirds of possession but Tottenham's defence and midfield were expertly drilled, as they stopped the visitors from creating the kind of clear chances that their dominance would normally bring.

And, in Harry Kane and Son Heung-min, Mourinho has two players that havedeveloped a brilliant understanding of how to pick off sides on the break.

Spurs just had two shots on target in 90 minutes but, so ruthlessly efficient are the front two, that was all they needed to see off City.

Mourinho was at his mischievous best in the build-up to the clash, questioning Raheem Sterling's exclusion from England duty, as he tried to once again get under Guardiola'sskin by suggesting the winger had been advised to feign injury in order to remain fresh for the trip to London.

The two managers were all smiles before kick-off, although only one of them was laughing at full-time, with Mourinho having secured a decisive and deserved victory.

If it wasn't at all shocking to see the Portuguese spoil Guardiola's good mood, it was arguably just as unsurprising to see Son act as a party-pooper.

The South Korean's fifth-minute strike was his fifth goal in his last five appearances against City, and his 11th in total this season.

From City's point of view, it was a poor goal too concede.

The burgeoning defensive partnership of Aymeric Laporte and Ruben Dias was starting to address the cracks in City's defence over the last 12 months.

However, they were both dragged towards Kane as Son dashed in behind to latch on to Tanguy Ndombele's lofted ball over the top before neatly finishing under Ederson.

With the South Korean now having six goals in total against City, only Jamie Vardy with nine has scored more times against Guardiola's side.

And that's not insignificant. Both are explosive forwards that break directly and quickly to expose the risk that comes with playing a high line.

Countering that kind of attacking threat is a puzzle that Guardiola has yet to work out. He's willing to take risks, of course, but it becomes an even more dangerous ploy when his own forwards prove so profligate in front of goal.

Indeed, with City having netted just 10 times in their opening eight Premier League matches, adopting such a bold approach now looks like a bigger gamble than ever before.