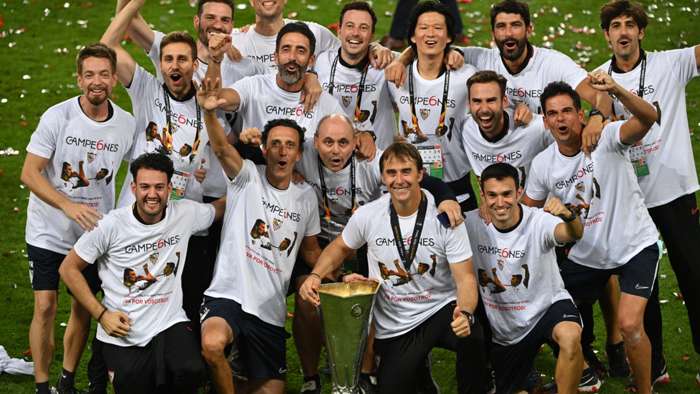 Jesus Navas says Sevilla's Europa League title win is in memory of the club's former stars Jose Antonio Reyes and Antonio Puerta as the La Liga side win the competition for the sixth time against Inter in a 3-2 victory.

Centre-half Diego Carlos scored the winner for Sevilla in the 74th minute as the Los Palanganas created the most opportunities despite conceding more possession to their Italian opposition.

"It is the most special day for being able to raise the cup as captain, with my Sevilla," Navas told Movistar.

"This is for all the people who are not with us anymore, for Puerta, Reyes ... my godfather who has passed away. We are all captains here."

Navas explained how proud he was of the team's achievement and said he believed the fans could be excited about the potential rise of the club in the future.

"This group deserve it, we have been fighting all the year," he said. "They worked day by day with the problems that there have been. And to all the fans who deserve it.

"The fans can feel proud with us, today and tomorrow they will enjoy. And Sevilla is getting greater every day."

Sevilla's road to glory in the Europa League included victories against Manchester United in the semi-finals, Wolves in the quarter-finals and Roma at the last 16 stage.

De Jong, who scored the winning goal against the Red Devils, felt his teamshowed great strength to win the tournament despite having such tough matches to overcome.

"It is incredible," De Jong told BT Sport. "We had such tough games all tournament but we played so well as a team.