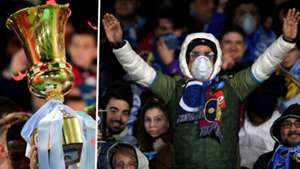 Inter's Coppa Italia semi-final second leg at Napoli has become the latest fixture to be postponed as a result of the coronavirus crisis engulfing Italian football.

Juventus' Coppa tie at Milan, which was originally due to take place on Wednesday, has already been called off and the fixture between Napoli and Inter scheduled for Thursday at Stadio San Paolo will now also not be taking place.

Italian football is enduring chaos with its schedule due to the threat of the spread of coronavirus, of which there have been over 2000 confirmed positive cases in the nation.

Several Serie A fixtures have been postponed over the past two weekends, including the Derby d'Italia between Juve and Inter, which was due to take place last Sunday.

ANSA reported that the government will implement measures to cancel all sporting events for 30 days, although football matches may yet be allowed to take place behind closed doors.

Inter CEO Giuseppe Marotta, speaking prior to a Serie A council meeting on Wednesday, insisted the club will accept whatever measures are implemented in the coming days and weeks, stating: "We will adapt to what they decide."

Inter lost the first leg of their Italian Cup clash 1-0 at San Siro, with Fabian Ruiz scoring the winner for Napoli.

Antonio Conte's side will now look ahead to a meeting with Sassuolo at the MAPEI Stadium on Sunday, but it is not yet clear whether the fixture will go ahead as planned.

The same goes for Napoli as they prepare for a trip to Verona this weekend, with more disruptions to the Serie A calendar expected.

The Italian top flight is not the only league to have experienced issues due to the coronavirus, with the entire Swiss Super League being suspended indefinitely until March 23.

In Germany, Bundesliga outfit RB Leipzig have been forced to apologise for ejecting 20 supporters from their stadium during a 1-1 draw with Bayer Leverkusen on Sunday over fears they were carrying the virus.

The Premier League are reportedly now coming up with a contingency plan to deal with the outbreak should it affect English football, with matches likely to be played behind closed doors, and doubts have already been raised over whether Euro 2020 will go ahead this summer.