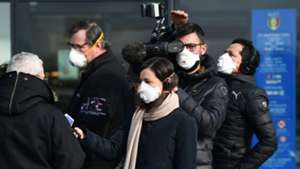 Napoli have asked for this week's Coppa Italia semi-final second legs to be postponed until May and have suggested that the postponed clash between Juventus and Inter should be played on Wednesday instead.

The clash between two of the leading contenders to win the Scudetto this season was due to take place on Sunday at the Allianz Stadium, but owing to fears over transmission of Coronavirus it has been pushed back by authorities to May 13, forcing a rescheduling of the Coppa Italia final to a week later.

Napoli - who face Inter in the final four of the Coppa, with Juve taking on AC Milan in the other semi-final - have demanded that the delayed fixture be played in midweek, despite northern Italy being one of the hotspots of the virus around the globe.

"We are faced with an emergency of a global scale with the coronavirus and must therefore respect the decisions, but football is nonetheless an industry that must be protected," Napoli chief press officer Nicola Lombardo told Radio Kiss Kiss.

"To us, it seems that it would be fairer for all concerned if Juventus vs Inter was brought forward to Wednesday, so the two Coppa Italia semi-finals can easily be postponed to May.

"Otherwise, the tournaments are going to be distorted by these changes. If games are going to be moved around anyway, it would be only right to ensure the fairness of the Serie A tournament and of the individual teams if Juventus vs Inter is played on Wednesday and the two Coppa Italia semi-finals moved to May."

Five Serie A fixtures from this weekend were postponed until May, despite an announcement that they would previously be played behind closed doors.

This has generated much controversy around Italy, with Napoli not the only club to take aim at the authorities.

"I wish to point out that the whole situation was dealt with badly. It should've been handled much quicker, also to avoid certain allusions," Inter president Beppe Marotta complained.

"Serie A decided on Thursday that it'd play behind closed doors, then on Friday Minister for Sport Vincenzo Spadafora advised against it. At that point, the error was made by the President of Serie A, Paolo Dal Pino, who made a decision without asking anyone.

"What he should've done was call an extraordinary meeting to discuss the decision with everyone together what needed to be done, to reach common ground between what the league had asked for and the Government's indications. Instead, we just received notice that this was being done and that was that.

"This is simply not acceptable. This is why Inter asked for and were given an extraordinary meeting of the 20 league clubs for Sunday. We want to discuss the future, because what happens from now in is what worries me.

"I am worried for Inter-Sassuolo next Sunday. What do we do then? We cannot play behind closed doors, as it'd be absurd to use that just a week after it was considered unsuitable during a medical emergency. Closed doors is no longer an option, it has been taken off the table.

"Let's not even talk about postponing the game to Monday, as Inter have already been damaged and paid a heavy price. We've got a Europa League game three days later anyway. So it's either on Sunday with a crowd or I see no other option."

"The Government gave Serie A two options: postpone or play behind closed doors," he said.

"The league opted to postpone, also to avoid having big games played in empty stadiums. It was an autonomous decision. It sets a precedent and I understand those who say it ought to be maintained now for everyone, but from next week fortunately it'll be for three regions and no longer six.

"When the country has over 1,000 cases and almost 30 people dead, having the football games all play at the same time is really not my first priority. I understand the fans are angry, but they cannot use that as their main thought process when judging difficult decisions."