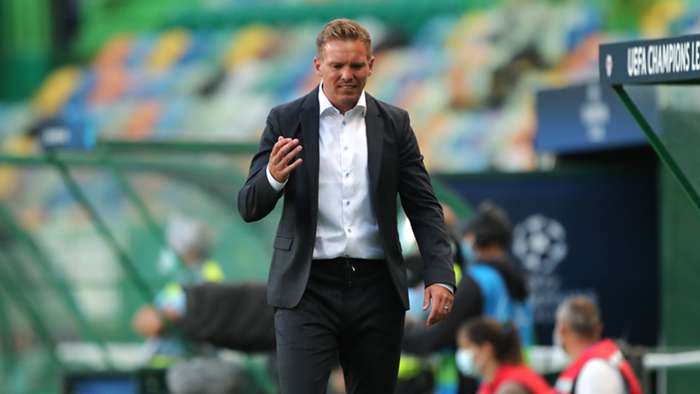 Dani Olmo's 50th-minute opener was cancelled out by Atletico star Joao Felix's penalty with 19 minutes remaining, but Adams' 88th-minute effort proved the last word as Leipzig reached the last four of the competition for the first time.

Leipzig will face Ligue 1 powerhouse Paris Saint-Germain in Tuesday's semi after becoming the first German club outside of Bayern Munich and Borussia Dortmund to make it tothe semi-finals since Schalke in 2010-11.

Speaking post-match, Nagelsmann told reporters: "I'm not going to say anything about the title. But of course, we do want to reach the final now.

"That's just normal, I think. If we get there, we can speak about other things.

"The team as a whole beat Tottenham in the last 16 before and now Atletico. It's not about duels between coaches – not against Jose Mourinho, not against Diego Simeone and now not against PSG coach Thomas Tuchel either. It is a team game and the guys did brilliantly today."

Nagelsmann also revealed he had a half-time spat with Diego Simeone, though the 33-year-old German played down the incident as he hailed the Atletico boss.

"Simeone congratulated me afterwards, it was very sincere. He said, it was a great game and a deserved winfor us," added Nagelsmann.

"At half-time we had a little spat, but that wasn't very serious. He's just an incredible winner who even wants to win on the way to the dressing room.

"But that's not bad, I actually want to point out that I think he's personality as a coach is awesome. So, everything's fine."

Simeone himself praised Leipzig for their performance on Thursday, declaring Atletico had no excuses for losing.

"We haven't been able to play the way we wanted. I liked Leipzig," he told Movistar. "They had great determination, enthusiasm and freshness. That cost us. There are no excuses.